George and Cecil will air final episode this Sunday, February 7 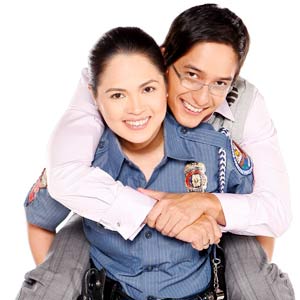 The sitcom George and Cecil, starring Judy Ann Santos and Ryan Agoncillo, will end after airing for around 8 months on ABS-CBN.

Real-life hubbies Judy Ann Santos and Ryan Agoncillo finally bid farewell to the odd couple they portray on television as their weekend romantic comedy show George and Cecil will come to an end this Sunday (February 7) on ABS-CBN.

In an interview, the two admitted that they were very sad especially during their last day of taping where they, together with co-actors and show staff and crew, were having dinner for the last time.

"We've been working together for more than a year and we will definitely miss our moments on the set. They're like family to us so it's really hard to let go," said Judy Ann.

Judy Ann added that the show is indeed a special and memorable one for Ryan and her as it is the first time they teamed up on television after their surprise wedding held in April of last year.

Other cast members also showed the importance of George and Cecil to them by turning the last taping day dinner into a mini-celebration, happily sharing memories of the show with the whole staff and crew.

George and Cecil first aired in June 2009. The program featured the story of unconventional partners George, a police woman, and Cecil, a high school teacher, who happened to find love true love in each other despite their extreme personal and professional differences.

Together, they faced the problems that come with the newly married life, from the difficulties of adjusting when starting to live together, up to the challenges of balancing their role as spouse and individual, even the tricks in dealing with in-laws.

Every episode shared valuable lessons with the viewers, especially those who, just like the characters they portray, have recently tied the knot and are adjusting to their new life.

As the show ends this coming Sunday, George and Cecil will face their biggest challenge yet as husband and wife—starting their very own family.

What awaits the couple? How will they welcome the challenge of parenthood?

Don't miss the last episode of George and Cecil this Sunday (February 7) after Sharon in ABS-CBN.