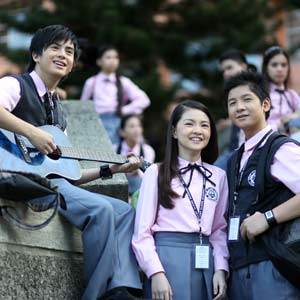 Fresh from the success of Stairway to Heaven and Dear Friend: My Christmas Wish, the trio of Barbie Forteza, Joshua Dionisio and Jhake Vargas are back this time to discover the joys and innocence of young love through GMA-7's newest romantic drama, First Time.

The reality of starring in a primetime series still fascinates Barbie, who revealed feeling overwhelmed by the continuous amount of trust being given to her by the network. Joshua and Barbie's team-up continues to generate excitement amongst viewers owing much to their chemistry and natural charisma—two important ingredients needed for a successful screen tandem.

More than just touching on the subject of love and innocence, the coming-of-age series also dwells on friendship, family and life as seen in the eyes of youngsters slowly realizing life's complexities.

The show's director is Andoy Ranay with Kit Langit writing the script.

Two years later, Lukas returns to his home country and is admitted to the same school as Cyndi's. The change in Lukas is undeniable. Once a cheerful and fun-loving boy, Lukas has turned sullen and socially aloof even to his old friend, Cyndi.

Cyndi and her best friend Baste (Jhake) vows to help Lukas come to terms with the misfortunes he experienced in the past. The three youngsters become inseparable, passing most of their time at Baste's place while listening to music. Curiously, both Baste and Lukas, who had nothing much in common, are secretly in love to Cyndi.

But their friendship will face another challenge when a deep and dark secret buried beneath the past unfolds, one that will question their identities. Could they possibly have something more in common than they imagined? How will this bitter conflict affect their homes, their lives, and their young hearts?

Catch First Time on February 8 on GMA-7 before the news program 24 Oras.