Newscast "24 Oras" leads against rival from January 4 to 29 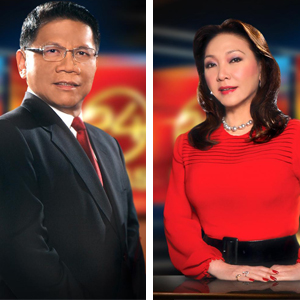 24 Oras maintained its lead over its rival primetime newscast, based on the Mega Manila TV Household Ratings data for the period January 4 to 29, according to AGB Nielsen Philippines. The GMA Network's primetime newscast led by 4.6 percent during the first week of January and continued to top the competition throughout the month.

GMA-7's Public Affairs programs also posted remarkable leads over the competition during the entire month. Unang Hirit beat Umagang Kay Ganda with a lead that grew from 0.6 percent to 1.6 percent by the last week of January.

Reporter's Notebook posted a 2.6 lead over The Correspondents from January 4 to 8. Born To Be Wild continued to dominate Probe Profiles/ Bandila the entire month, even posting a commanding 4.2 percent lead from Jan. 11 to 15. Kapuso Mo, Jessica Soho was also victorious as its ratings continued its climb during the whole month.

The latest ratings data solidifies 24 Oras's position as the leading and most preferred newscast, powered by the viewers' unwavering trust in the newscast and in the network.

In a quantitative survey conducted by AGB Nielsen Philippines last September, GMA-7 scored a credibility rating of 68.9 percent, besting its rival's 45.7 percent. In the same survey, GMA News and Public Affairs personalities topped the list in terms of appeal, credibility, competence, and interest.

Jessica Soho led all anchors and reporters in terms of appeal, Mike Enriquez was considered by respondents as the most credible, while Mel Tiangco was said to be the most competent and most interesting to watch. Arnold Clavio and Vicky Morales were also consistently in the top five news anchors across all measured attributes.

These findings underscore 24 Oras's dominance over the competition. Bannered by the most formidable and credible tandem in local broadcasting today—award-winning broadcast journalists Mike Enriquez and Mel Tiangco—and beefed up by the country's most respected news team that has won both local and international honors, GMA News' 24 Oras is committed to deliver only the untainted truth.

As 24 Oras remains the undisputed news leader, it strives even harder to give viewers the brand of journalism that the most credible news organization in the country has always stood for—upholding the highest standards of ethics and journalism.