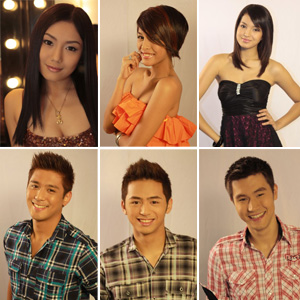 The Final 6 can heave a huge sigh of relief now that their battle for fame continues at least for a week.

Last Sunday, StarStruck V declared a predetermined non-elimination night with the announcement of the last and most dreadful twist this season—Factor 5. This suspended the individual text and online voting of the viewers.

Factor 5 has two parts. First, the voting for the last elimination night this coming Sunday, February 14 will be based through My5. My5 states that every text vote cast by the viewers should have five different names of the survivors they want to be part of the Final 5. One vote equals five survivors. One vote must have five unique names.

All votes with four names and below are considered incomplete. The council members composed of premiere talent manager Lolit Solis, multi-awarded actress Iza Calzado and Palanca award-winner Floy Quintos will also cast their votes through My5. The votes last week will be included in the My5 tally at the end of the voting period this week.

To vote for the top five survivors you want to be part of the Final Judgment through My5, Just text MY5 (space) SURVIVOR1, SURVIVOR2, SURVIVOR3, SURVIVOR4, SURVIVOR 5 and send to 2344 for Globe, TM and Sun subscribers, and 367 for Smart and Talk N' Text users. (This service is exclusive for the Philippines only.) Voting period ends at 12 nn on February 14.

The second part of Factor 5 will be revealed this Sunday.

It will be a tense week now that the six remaining survivors, Rocco Nacino, Enzo Pineda, Steven Silva, Sarah Lahbati, Nina Kodaka and Diva Montelaba, will face the most crucial and final elimination night.

Who will be part of StarStruck's Final 5? Will there be three boys and two girls? Or three girls and two boys?

StarStruck V airs every Saturday with host Raymond Gutierrez right after Pinoy Records and every Sunday with hosts Dennis Trillo and Carla Abellana right after Kap's Amazing Stories. StarStruck Shout Out airs three times a day, from Monday to Friday, with five-minute updates in the morning, afternoon, and primetime blocks on GMA.