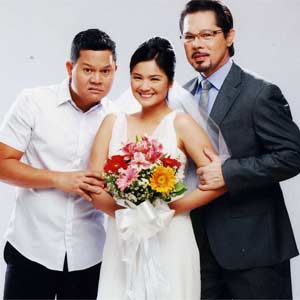 GMA-7 celebrates all forms of love in its heartwarming episode of SRO Cinemaserye called Meet the Fathers. The show will feature Bayani Agabayani (left) and Christopher de Leon (right), who will play the role of Alice's (Ynna Asistio) competing fathers.

Starting tomorrow, February 11, Meet the Fathers will show an inspiring yet comical story of intertwined lives of two fathers who only wish the best for their daughter.

He added, "Punung-puno po ito ng pagmamahal. We were having a nice time during our shoot. And this will explode, on your screen, the great meanings of love every Thursday."

In Meet the Fathers, a business magnate named Larry (Christopher) makes a deal with a philanthropist in Basilan named Rigor (Bayani Agbayani). Rigor promises to support his orphanage only if he goes to Manila to meet him personally.

Not long after, Rigor finds out Larry's real motive for the deal. Nevertheless, he is forced to stay and grants Larry's final demand—to attend the engagement party of his daughter Alice (Ynna Asistio).

During the party, Rigor is surprised to meet the girl he truly loved, who happens to be Larry's wife Christy (Angel Jacob). Then he learns that Alice is not Larry's real daughter, which makes him suspect that he's the biological father.

The conflict begins when both fathers compete in giving help and comfort to their daughter, who finds out that her fiancé (Joross Gamboa) is cheating on her.

Completing the cast of this four-part SRO Cinemaserye episode are Dexter Doria as Mamu and Jacob Rica as Lyle. The production is led by Andoy Ranay together with the team of creative screenwriters headed by Jake Tordesillas.

Find out which of the two fathers will earn the undivided attention and love of their daughter in Meet the Fathers starting tomorrow, February 11, right after Queen Seon Deok on GMA-7.