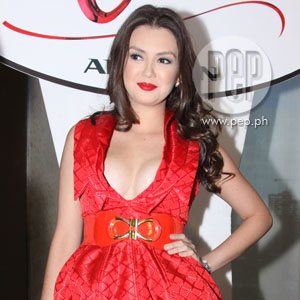 Angelica Panganiban earns a new title by playing the lead role in ABS-CBN's upcoming primetime series called Rubi. The "Primetime Gem" will play a bida-kontrabida role in the Pinoy adaptation of the Mexicanovela, which was shown in the same network a few years ago.

Rubi is about a lady who comes from poverty and wants to get away from it in any way. She is determined to become wealthy even if it means destroying the lives of her loved ones.

THE LEADING MEN. In this teleserye, Angelica would be working with two of the Kapamilya leading men, Diether Ocampo and Jake Cuenca.

Although her role would be a bit sexy, Angelica said she did not have any hesitation doing it with these actors.

Diether will give life to the character of Hector, who was supposed to take care of his family's thriving luxury liner business. However, he did not follow his mother's wishes. Instead, he pursued a career in medicine. He will be the boyfriend of Selina (played by Shaina Magdayao).

Jake will be playing the role of Alejandro, a young man who fulfills his dream of becoming a doctor through the help of a scholarship grant from Hector's family foundation. Rubi thought that Alejandro was also rich so she sets her eyes on him first before Hector.

Witness how Angelica Panganiban transforms from bida to kontrabida in Rubi starting this Monday, February 15 on ABS-CBN Primetime Bida.