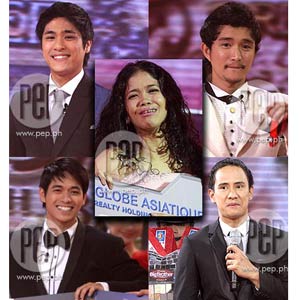 The Pinoy Big Brother Double Up housemates had the chance to reminisce about their highs and lows during the PBB Double Up: The Big Reunion special aired last Sunday, February 14, on ABS-CBN.


Kuya's former tenants met for the last time with PBB hosts Toni Gonzaga, Mariel Rodriguez and Bianca Gonzales. Toni was situated in House A with the Big Five, Bianca was in House B with the other housemates while Mariel was in the confession room.


All 28 housemates were very happy to be a part of this season of firsts: the first time to have two houses, the first time to have Big Five in the finals and the first season to have 28 housemates. Toni started the TV special by asking the PBB Double Up Big Winner Melissa "Melai" Cantiveros if she has already realized her victory. The Inday KenKay ng GenSan candidly admitted: "Hindi pa rin po nag-si-sink in, lutang pa rin ako at ang sarap ng feeling na tinatawag ako ng tao na 'Melai, Melai.' Di makapag-pigi na happiness."


Toni then asked Melai and her boyfriend, Third Big Placer Jason Francisco, when they officially became a couple. Melai then revealed that Jason still has to visit her house to make it official.

Afterwards, a recap was done to recall the memorable moments that took place inside the PBB house. This included the eviction of Jimson Ortega (the first to be evicted), followed by the forced eviction of identical twins Toffee and Kenny Santos, Tom Rodriguez and Yhel Punzalan, the voluntary exit of Princess Manzon and JP Lagumbay.


They also recalled how Kath Ortega-Lopena and Patrick Villanueva as well as Rob Stumvoll and Rica Paras had to pretend that they were couples in love with each other. This task was particularly hard for Jimson, the real husband of Kathleen.


When the twins JP and JM Lagumbay were interviewed, they were not that sad about failing in their task of fooling their fellow housemates. "So funny kasi lahat ng pwedeng gawin ginawa naming, pati pagsuot ng mask, to the end hangga't nahuli kami nag-try kami magpursigi sa task namin," explained JM.

Bianca then asked the other pretend-couple, transsexual Rica Paras and Rob Stumvoll, if they did have an actual fight. Rob denied that there is a gap between them. He even prefers to call Rica as his "bro."


For her part, Rica revealed that she has safely stored the ring given to her by Rob. "I keep it safely in my heart, more than the ring it represents the efforts, the heart and sentiments me and Rob gave to each other."


Bianca, still pursuing the topic of love, asked housemate Carol Batay to choose between Kenny or Hermes Bautista. Carol gamely responded to the question by kissing Kenny, spurring the housemates to tease her about it.

SPECIAL HOUSEGUESTS. The recap continued with a rundown of the season's special guests such as German adult star Super G as well as Kattlin Laas of Big Brother Finland.

This edition also had Sharon Cuneta, Coco Martin, Jericho Rosales, Kim Chiu and Gerald Anderson as celebrity guests. One sensitive topic was raised when they recalled the negative comments of housemates Rob, Hermes, Patrick and Rocky Salumbides. one of them even referred to Rica as a "she man." Bianca then asked Rica if all is well between her and the housemates who gave those inappropriate comments. The Math Goddess then admitted: "After that, we went out we talked about it and reconciled our differences."

After all the talk about controversies, Mariel lightened the mood by asking housemates Hermes and Cathy Remperas about the state of their international romances. It will be recalled that Hermes had a special bond with Finnish Kattlin when she visited the PBB House, while Big Brother Finland housemate Oso developed a special fondness for Cathy when she took part in the Big Brother Swap. Hermes divulged that the kisses he shared with Kattlin were serious and special, "Naging close talaga kami ni Caitlin, nagkaroon ng halik para sa special someone, nagkaroon kami ng special feeling."


For her part, Cathy revealed that she and Oso still talk on the phone and added each other on Facebook. As a surprise for Hermes and Cathy, Oso and Kattlin were able to talk to the housemates via phone patch. Kattlin said that she missed Hermes but she hopes to see him again when she visits the Philippines soon.

STAR FOR ALL SEASONS. Before the night ended, the Star For All Seasons Vilma Santos joined the reunion special to give words of wisdom to the housemates. "Kilala ko kayong lahat kasi may 24/7 ako, and I think lahat kayo ay deserving na talagang manalo. This is not the end for you all, this is just the beginning, enjoy the moment because you deserve it. Pero ihanda nyo sarili nyo sa constructive criticisms, dapat after one week or one month nag-aadjust na kayo," said Ate Vi. She shared three things that the housemates had to learn if they are to survive in showbiz, "Smart work, hard work, and grace of God."