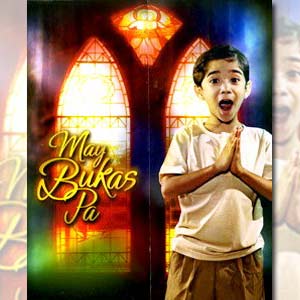 ABS-CBN's May Bukas Pa, according to global research specialist Taylor Nelson Sofres (TNS), is the number one TV program nationwide.

According to the report submitted to PEP (Philippine Entertainment Portal), the phenomenal growth—from a seven percentage point lead to a 17 percentage point lead—is attributed to the network's strong focus on its core viewers, and its commitment to improve the production quality, TV reception, and casting for its popular television series.

In Metro Manila, which comprises the majority of Mega Manila, ABS-CBN's audience share was 37% versus the competition's 40% in February, but ABS-CBN got 39% against GMA-7's steadily-dwindling share down to 35% by year end.

Throughout the country, ABS-CBN is still the undisputed national leader with its overall 2009 performance of 45% audience share versus GMA-7's 34%. It also exhibited a runaway leadership in Luzon areas with 49% audience share against competition's 32%; in Visayas with 62% versus 22%; and in Mindanao, where it smashed its competitor's 15% with 70%.

The corporate communications department of ABS-CBN also mentioned that in the Top 15 national regular programs of 2009, 14 shows were produced by the Kapamilya Network; the competition's best bet landed the 11th slot.

It's most popular program May Bukas Pa (37.2%) became timely and relevant given the global recession and catastrophes that hit our country.

Bagging the 2nd to 4th spots were strong programs—the local adaptation of I Love Betty La Fea (36.8%), starring Bea Alonzo as the Pinay Beatriz Pengson; the local adaptation of the Korean series Only You (36.3%), starring Angel Locsin, Diether Ocampo and Sam Milby; and the much talked about sibling rivalry between David and JR played by Jake Cuenca and Gerald Anderson, respectively, in Tayong Dalawa (35.5%). All three kept the Pinoy audience glued to their television sets.

On a similar note, TV Patrol World's 34.4% share was responsible for making the show the country's number one newscast and the only news program to make it to the Top 5 of TNS.

The reality-drama show Pinoy Big Brother Double Up, which scored its strongest season to date with an average of 32.2% in its pilot airing, and the remake of one of Ramon Revilla's classic Agimat saga Pepeng Agimat, which generated 31%, ranked 6th and 7th, respectively.

Katorse, which brought to life the story of innocent and naïve Nene (Erich Gonzales) who got pregnant at the early age of 14, surpassed expectations given its average rating of 30.2%.

Magazine program Rated K hosted by Korina Sanchez garnered an average rating of 29%, while the videoke-inspired show The Singing Bee rated at 28.1%.

In terms of program acquisitions, ABS-CBN also showed supremacy as the phenomenal Korenovela Boys Over Flowers, featuring Korean F4 Jun Pyo, Ji Hoo, Yi Jeong, and Woo Bin, garnered an average of 28.5%. This is the only acquired series to make it in the Top 20.

In summary, the report claims that ABS-CBN ruled the programming landscape last year across all genres, which included drama, news and current affairs, reality, fantasy, and game.

This year, the shows to watch for are the adaptation of Mexican telenovela Rubi, starring Angelica Panganiban; talent-reality show Pilipinas Got Talent; fantasy series Kokey@Ako; pocketbook-adaptations Midnight Phantom and Impostor, and remake of hit youth-oriented show Gimik dubbed as Gimik 2010.