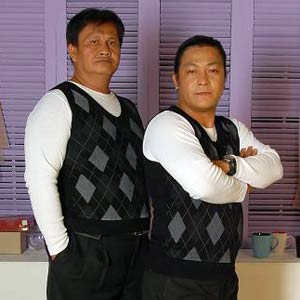 Will Omar the Ladder Balancer emerge as the first "Ultimate Talentado" of Talentadong Pinoy? Find out when the grand finals takes place on March 6 at the Cuneta Astrodome.

Who will be named as the Philippines' first "Ultimate Talentado"? Find out during the Talentadong Pinoy Battle of the Champions on March 6 at the Cuneta Astrodome, Pasay City.

The jurors and the text-voting public will choose the "Ultimate Talentado" among the following Hall of Famers: The Far East Acrobatic Gutierrez Family, Wan Lu the Puppeteer, Joshua "The Yoyo Tricker," The Tribal Dancers, singer Leah Patricio, Ferdinand Clemente a.k.a. "Makatatawanan," and Omar "The Ladder Balancer."

In addition, a wildcard challenger will be chosen throughout the comeback episodes on all Saturdays of February.

Every Saturday of the month, two previous Talentadong Pinoy contestants will be selected on the show to join the roster of "Wildcard Challengers," from which only one will be chosen (through audience text votes) to meet and compete with the Hall of Famers at the grand finals on March 6.

One of the contenders in the Battle of Champions is the sixth Hall of Famer "Omar the Ladder Balancer." Born Omar Antonio Doroin in a family of circus acrobats, Omar found and developed his career and passion for ladder balancing in the province of Marinduque. He trained under Raul Napolitano, a circus talents booker in the locale. But little did Omar and Raul know that their partnership in the circus scene would soon be more than just a professional relationship when Omar's passion for ladder balancing extended to Raul's eldest daughter.

"Itong si Omar at ang panganay ko, naging magkaibigan sila. Noong bandang huli, hindi lang sila magkaibigan, kundi magka-ibigan na," said Raul. Of course, Raul was against their relationship at first, but later realized that Omar is a very hardworking and talented man, and was much like a son of his own especially when a grandchild came along.

From then on, the in-laws' harmonious relationship led to bigger dreams and bigger performances when Raul came back to Marinduque after working and performing in Qatar, where he learned about Talentadong Pinoy through the Internet.

But it did not stop them from trying to climb their ladder to success and they eventually won in the comeback episode, where Omar stretched his victories to the Hall of Fame and, consequently, in March at the grand finals.

Watch for more inspiring and amazing stories about the seven talented Hall of Famers in the coming weeks before they compete during the grand finals of TV5's Talentadong Pinoy.