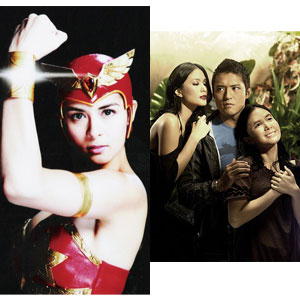 Twenty-one shows of GMA-7 made it to the Top 30 programs of Mega Manila from January to December 2009 (based on data from AGB Nielsen). These include Darna (left) and Luna Mystika (right).

GMA Network has kept its stronghold of the TV ratings lead in viewer-rich Mega Manila in 2009, according to a report furnished to PEP (Philippine Entertainment Portal). This information is based on data from AGB Nielsen, considered to be a leading TV ratings data supplier in the country.

AGB Nielsen Philippines provides TV ratings data to at least 24 local companies including GMA Network and another TV channel (not ABS-CBN). Top media agencies plus six regional clients likewise subscribe to AGB Nielsen. On the other hand, according to sources cited in the said report, ABS-CBN is the sole subscriber to TNS.

From January to December 2009, 21 GMA Network shows made it to the overall top 30 programs list in Mega Manila, with the top 8 programs all Kapuso shows including Darna, Luna Mystika, Zorro, Totoy Bato, Lalola, Stairway to Heaven, 24 Oras, and Gagambino.

GMA Network had 23 programs (inclusing TV specials) out of the top 30, with the top 12 slots all belonging to the Kapuso Network.

Moreover, GMA Network has kept the nationwide gap within striking margin, posting an average audience share of 34.3% or just 6.6 percentage points away from ABS-CBN's 40.9% from January to December 2009.

The report furnished by the Corporate Communications department of GMA-7 also specified that 13 out of the Top 30 shows nationwide are shows of the Kapuso Network.