Tribal dancers will fire up Talentadong Pinoy's Battle of Champions 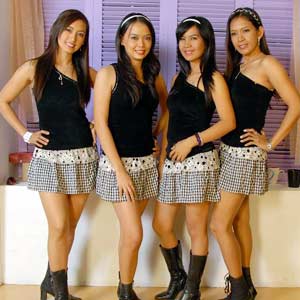 The Tribal Dancers of Muntinlupa City are the only all-female group in the Hall of Fame of Talentadong Pinoy. The grand finals of this TV5 show will take place at the Cuneta Astrodome on March 6, 2010.

Despite their physical disabilities, The Tribal Dancers will wow everyone on TV5's"Talentadong Pinoy Battle of the Champions." With their beauty, grace, and sexy talent of poi dancing, the only all-female group in the Hall of Fame will compete for the grand title of "Philippines' First Ultimate Talentado" in the talent show's much-anticipated grand finals on March 6 at the Cuneta Astrodome.

Composed of sisters Mench and Zam Mijares, their cousin Grace Cristobal, and Zam's bestfriend Liezl Cabriga all coming from Muntinlupa City, the four girls instantly became a crowd darling since their first performance in July 2009 because of their unique talent that's considered both sexy and dangerous.

However, Zam, Mench, and Liezl did not let their disabilities hinder them from proving and showing their talents through physical performance. It was through Mench and Zam's brother that the girls learned poi dancing, and they admitted that it was difficult at first. "Si Grace lang ang normal ang paningin at pandinig sa amin, kaya siya rin ang nagsisilbing gabay naming tatlo," said Zam.

With determination, passion, and the support that they get from each other, the four girls mastered the routine and realized that it is through the art of poi dancing that their senses become one.

Since then, the girls have been performing for different events, parties, and shows, until they learned about Talentadong Pinoy through a friend. They lost in their first performance, but the girls really have that amazing spark that has so amazed the jurors and the audiences that they won in a comeback episode, which the girls consider as their biggest break until eventually they were inducted to the Hall of Fame.

The jurors and the text-voting public will decide the Tribal Dancers' fate. Will they be able to become the Philippines' First "Ultimate Talentado" and beat The Far East Acrobatic Gutierrez Family, Wan Lu the Puppeteer, Joshua "The Yoyo Tricker," singer Leah Patricio, Omar the Ladder Balancer, Ferdinand Clemente a.k.a. "Makata-tawanan," and a wildcard challenger who will be chosen throughout the comeback episodes in all Saturdays of February.

Every Saturday of the month, two previous Talentadong Pinoy contestants will be selected on the show to join the roster of "Wildcard Challengers," from which only one will be chosen through audience text votes to meet and compete with the Hall of Famers at the grand finals on March 6.

Watch out for more inspiring and amazing stories about the seven talented Hall of Famers in the coming weeks as the grand finals of TV5's Talentadong Pinoy nears.