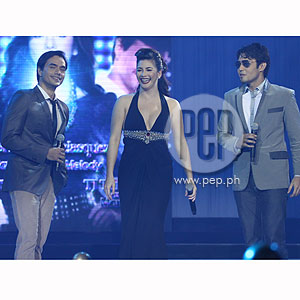 Regine Velasquez contributed several ideas of her own for GMA-7 first-ever kantaserye titled Diva. Asia's Songbird told members of the media during the February 24 grand presscon of the show that she was given plenty of leeway in her latest TV show.

Aside from Regine, Diva will feature a star-studded cast composed of Mark Anthony Fernandez, TJ Trinidad, Rufa Mae Quinto, and Glaiza de Castro along with music icons Buboy Garovillo and Randy Santiago. It also marks the first time that the Queen of Soul, Jaya, will take part in a soap opera.

Diva reunites the team up of Regine and Mark Anthony who were first paired in GMA-7's adaptation of the Koreanovela Ako si Sam Soon, which was also under the direction of Dominic Zapata.

Direk Dominic described their show by saying, "Panoorin n'yo po ang show namin dahil masarap panoorin. Lahat po tayo mahilig sa musika. Kung hindi po kayo mahilig sa musika, it will still play with your heartstrings...it will still play with your inner piano. It will feature a lot of guest artists from the music industry who will not only lend their credibility to the show but will also lend their talents to the show. Every week, meron po tayong production numbers."

SYNOPSIS. Diva is about the funny but touching life of Sampaguita a.k.a. Sam (Regine Velasquez), a hideous-looking woman who dreams of becoming a famous singer someday. Sam's singing prowess and good-natured personality will lead her to find a spot in the entertainment industry despite her unpleasant looks.

But life will not be that easy for Sam because there are pretty, sexy and talented ladies who will make life miserable for her. These include Lady (Rufa Mae Quinto), a model who aspires to be a diva and Tiffany (Glaiza de Castro), Lady's personal assistant who will eventually becomes a singer too. These women will be Sam's friends-turned-rivals.

Another character who will hinder Sam's dreams of becoming a singer is her own mother, Paula (Gloria Diaz), a former beauty queen and a frustrated singer-actress. She blames her ugly daughter for making her lose the opportunity to become big in showbiz.

Unlike her mother, Sam's dad Elvis (Buboy Garovillo), a former musician-turned-taxi driver, is very supportive of her dreams. He will push his daughter to reach for her dream. He is Sam's number one fan.

Aside from Elvis, the people who believe in Sam's talents are her best friend Barbra (Jaya), her half-brother Smith (Mark Herras), her neighbor Vanessa (Ynna Asistio), and George (Randy Santiago), an executive producer of a recording company.

Two young and gorgeous men, meanwhile, will fall for Sam. They are cousins Gary (Mark Anthony Fernandez) and Martin (TJ Trinidad). Gary is Sam's cool and loyal childhood friend. He is a good lyricist and a good writer. His goal is to find a woman who deserves his love.

Martin, on the other hand, is a rich, charming, boy-next-door kind of guy. He is a good composer and very passionate about his music. His parents want him to focus on classical music but he prefers pop and alternative music.

Who among these men will truly love Sam? Does having an ugly face automatically become an impediment to one's dreams? Is surgery the best solution to fulfill one's ambitions? When Sam gets the spotlight that she aspires for, will she manage to withstand the intrigues that go along with it?

Join Sam as she takes a humorous and awe-inspiring journey in GMA-7's first-ever kantaserye titled Diva. It will air on the Kapuso Network starting Monday, March 1, right after The Last Prince on GMA Telebabad.

CLICK HERE to see the photos of the cast members.