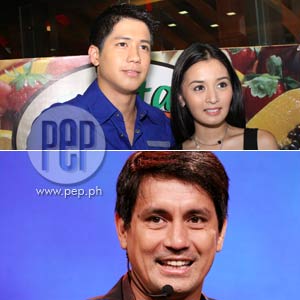 Dapat Ka Bang Mahalin, which was topbilled by Aljur Abrenica (above, left) and Kris Bernal (above, right), was the number one afternoon drama soap, while Richard Gomez's (below) Family Feud topped the game show category. Data was provided by AGB Nielsen Philippines, which—as indicated in GMA-7's email—"is the more widely recognized ratings data supplier in the country, providing TV ratings data to at least 24 local

These days, the fight between TV stations is more intense than the rivalry among stars.

Gone are the days when fans would write to various publications to protect or defend their idols. Now it's the network battle that's reached cyberspace, where Kapamilya and Kapuso compare notes and numbers on the performance of their favorite TV shows.

Both TV giants are aware that the public takes these figures seriously; and so, they have become even more transparent and detailed when it comes to their ratings reports.

This year, the corporate communications group of Channel 7 started coming up with a summary of its monthly viewership share. (CLICK HERE to read related article.)

Last weekend, GMA-7 put emphasis on its dominance in the Mega Manila area, which comprises "55%" of AGB Nielsen's National Urban Television Audience Measurement, and is generated from a bigger panel of 800 TV households . (CLICK HERE to read related article.)

This week, the data forwarded by GMA-7 underscored the strength of its various shows in the Mega Manila area, regardless of the format or genre.

See below for the highlights of the said report, which was released by AGB Nielsen Philippines:

As mentioned in the previous reports, the audience share of GMA-7 for the month of January is 38.3% versus ABS-CBN's 35.3%. The Kapuso Network explained, "The strong performance was due to adjustments made by the Network in its programming line-up and schedule, coupled with viewers getting hooked in the exciting developments that unfolded in various primetime programs that peaked during the month."

The same stars were deemed as top-raters.

There's Marian Rivera, whose Darna became the number one program, with an average household rating of 32.1%. The series ended last February 19, and was replaced by Panday Kids.

There's the Kris-Aljur tandem in The Last Prince, which got included in the top ten.

Other shows that made it to the top ten programs (overall) were GMA-7's flagship news program 24 Oras; Full House, starring Richard Gutierrez and Heart Evangelista; and the Christmaserye that extended until January, Sana Ngayong Pasko.