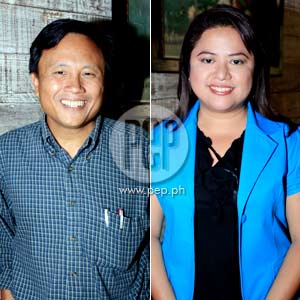 In keeping with its tagline, "Ang bawat dokumentaryo ay isang pagtuklas,"this month's I-Witness features epic discoveries—stories that are bold, intriguing and surprising. Howie Severino (left) and Sandra Aguinaldo (right) investigate stories that have made an impact on their own lives and the lives of other Filipinos.

I-Witness, GMA-7's most awarded documentary program, pioneers a new breed of documentary beginning this March on GMA-7. In keeping with its tagline, "Ang bawat dokumentaryo ay isang pagtuklas," this month's episodes will feature epic discoveries—stories that are bold, intriguing and surprising.

Sandra Aguinaldo investigates a shocking record that is perhaps unknown to many Filipinos. Testimonies from World War II suggest that the largest feeding frenzy of sharks in recorded history happened right here in the Philippine Sea. Somewhere in the vicinity of Leyte Gulf, hundreds of American soldiers were left wounded in the water after their ship, the USS Indianapolis, was torpedoed down. Sandra Aguinaldo interviews a survivor who shares the horror of watching his comrades being eaten alive by what he insists are vicious sharks. Sandra visits the site of the infamous incident and attempts to solve the puzzle. Is the Philippine Sea really the most notorious of all? Or is there another truth that lurks beneath history's uncharted waters?

Jay Taruc is known for documentaries in which he throws himself into the world of different people from all walks of life. This March, he immerses in the correctional system to experience and document the lives of prison inmates. Completely locked up and without the usual comforts of his everyday life, Jay experiences what it's like to live in a prison cell and perform an inmate's duties. He learns the ins and outs of the penitentiary, studies the culture of survival of the fittest, and brings home the untold stories of forgotten members of society.

Kara David journeys to a secret location where a group of men have dug a massive hole into the ground in search of buried treasure. Dozens of gold bars, believed hidden by Japanese generals, are the main target. A map and a set of codes lead Kara and the team to the supposed site of buried gold. But perhaps most telling is a living witness' account of how the treasure was hidden. He claims he was tasked by Japanese officials to carry unidentified yet highly valuable packages to a hidden site, which he reveals to the I-Witness team. Kara David explores the never-ending hunt for hidden riches.

Howie Severino was a photojournalist even before he began making documentaries. At the height of violent dispersals at student rallies during Martial Law, Howie took a photograph of a young woman being taken by the police. The photo resulted in Howie's imprisonment and trial. He was eventually released, but he never knew the fate of the woman in the picture. Decades later, Howie searches for the woman whose life and photograph so significantly shaped his own story. He also dissects the back and front stones or compelling photographs, proving that a picture indeed paints a thousand words.

I-Witness also showcases a new, cutting-edge look—from the opening billboard shot using the latest in video technology to the episodes featuring breakthrough treatments to the genre.

Watch the changes on this GMA-7 documentary show beginning this Monday, March 8, after Saksi.