Short films of Brillante Mendoza and Jeffrey Jeturian are X-rated 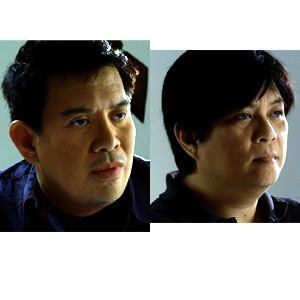 The short films of Brillante Mendoza (left) and Jeffrey Jeturian (right) for the omnibus project AmBisyon 2010 have been given an X-rating by the Movie and Television Review and Classification Board. ANC will request that the MTRCB conduct a second review for the two short films.

The Movie and Television Review and Classification Board has deemed two short films of Brillante Mendoza and Jeffrey Jeturian as X-rated or unfit for public exhibition.

These short films are supposed to be part of ANC's omnibus project called "AmBisyon2010." The news channel has tapped 20 Filipino filmmakers to create films on the 10 issues that will determine the 2010 elections. Given film grants and full creative freedom, the directors offered their talents for free in this project, which is scheduled to be screened on April 6 at the Cultural Center of the Philippines and in a five-episode weekly series over ANC and Studio 23 beginning April 9.

The renowned director told PEP (Philippine Entertainment Portal) that ANC will file an appeal this Monday, March 30, and that he has no plans of changing anything in his short film.

In a documentary aired on ABS-CBN and ANC about the making of this project, Direk Brillante explained why he decided to use images of poverty for his short film. "Tinatanong ako, 'Bakit puro kahirapan ang pinapakita mo sa Pilipinas?' I'm showing this because I have hopes. Mayroon akong gustong mangyari, mayroon akong gustong changes. But as long as poverty is there, wala akong magagawa. 'Yan ang mga kuwento mo kasi 'yan ang mga nakikita mo, e."

Here is the complete statement of ANC regarding this issue:

"Two of AmBisyon's films, directed by internationally acclaimed filmmakers Jeffrey Jeturian and Brillante Mendoza, were rated X on March 25, by the MTRCB.

"Jeturian's film for ANC, the ABS-CBN News Channel, focused on the state of the economy. His camera follows a newspaper from the time it is delivered to a homeowner to when it is used to wipe feces from the foot of a cart-pushing vendor. Jeturian uses a newspaper printed with the same controversial advertisement that came out in early January trumpeting the administration's economic successes. The film, called "Ganito tayo ngayon, Paano na tayo bukas?" ends with President Arroyo's photo on the crumpled newspaper.

"The MTRCB said in its decision that the film was X-rated for "undermining the faith and confidence of the people in government."

"Mendoza's film, "Ayos Ka" is a music video whose hopeful soundtrack is a stark contrast against images of poverty, prostitution, drugs and murder.

"The MTRCB claimed Mendoza's film is "injurious to the prestige of the Republic of the Philippines and its people."

"ANC produced the AmBisyon 2010 film series in the name of public interest, to offer a nation on the verge of a critical election the chance to focus on issues, not personalities. It is an advocacy shared by the film industry. Twenty of the country's most powerful voices in cinema have offered their talents gratis to each create a short film on a chosen issue.

"The films are scheduled to screen on April 6 at the Cultural Center of the Philippines and in a five-episode weekly series over ANC and Studio 23 beginning April 9.

"We in ANC respect due process, and will be requesting a second review on Monday. We hope the MTRCB will reconsider.

"We support our filmmakers in their decision not to revise their films. While the views of the 20 amBisyon's filmmakers may not necessarily reflect ANC's, we believe these films are legitimate perspectives of the state of the nation.

"We trust in the public's capacity to decide whether they will claim these views as their own."