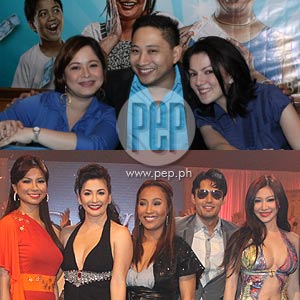 According to AGB Nielsen, GMA-7 posted an average overall audience share of 36.3 percent in Mega Manila. Some of the Kapuso shows that have been doing well in the ratings game are Pepito Manaloto (top) and Diva (bottom).

GMA Network claims that it has maintained its TV ratings lead in viewer-rich Mega Manila in March 2010, based on figures from TV ratings data supplier, AGB Nielsen Philippines.

Last March, GMA-7 posted an average overall audience share (6 a.m. to 12 mn) of 36.3% in Mega Manila. According to the corporate communications department of GMA-7, this figure is higher by 0.9 percentage points compared to ABS-CBN's 35.4%. They attribute the slight lead to the steady performance of GMA-7's primetime programs as well as the high ratings of new shows launched in March.

Including specials, 15 GMA Network programs made it to the list of overall top 30 programs (with data from March 28-31 based on overnight ratings). Manny Pacquiao's latest fight against Joshua Clottey topped all programs, while the Kapuso Network's two primetime fantasy series, Panday Kids and The Last Prince, led by primetime's most sought after love team of Aljur Abrenica and Kris Bernal, were also in the top 5.

GMA Network's banner newscast 24 Oras got the highest rank among all news programs as it landed 8th on the list of top 30 overall programs. 24 Oras had an average rating of 26.4 points, ahead of rival TV Patrol World's 24.1 points.

Meanwhile, the March 28 pilot episode of Party Pilipinas, the Kapuso Network's new Sunday noontime variety show, posted a rating of 15.5 points. The GMA-7 report indicates that its rival program ASAP XV posted an average rating of 14.4 points for the month of March.

A number of Q Channel 11 programs also took spots in the top 30 list of News and Public Affairs shows including Misteryo, Balitanghali, and True Stories.