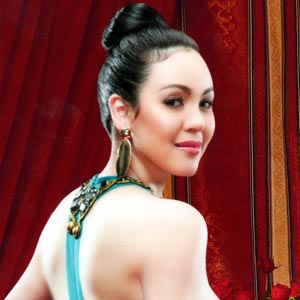 The first installment of Claudine, titled "Alzheimer's," will air this Saturday, April 10. For the first time, Claudine Barretto will act opposite her husband Raymart Santiago—an experience that she describes as both exciting and awkward.

That actress Claudine Barretto was given by GMA-7 her own drama anthology series says a lot about her status as one of the recognized young actresses of her generation.

Claudine admitted that she felt "overwhelmed" by the importance given to her by the Kapuso network since transferring late last year.

"I got more than I really wanted," a beaming Claudine told members of the entertainment press last April 5 at 55 Events Place on Tomas Morato, Quezon City.

It was announced at the program's press conference last April 5 that some of the network's top directors have relayed their intention to direct at least one episode. Aside from the directors, fellow Kapuso talents are also said to be offering their services to star alongside Claudine.

FIRST TIME WITH RAYMART. For its maiden offering, titled "Alzheimer's," Claudine portrays the character of Susan. Andy [Raymart Santiago], Susan's husband, develops a rare case of early Alzheimer's disease, causing him to gradually lose memory along with his feelings for his wife. His condition threatens to completely erase all the love, struggles and triumphs of their relationship.

"Alzheimer's" marks the first time that the viewing public will see the real-life couple together in a drama episode. Claudine confessed feeling both excited and awkward at first, saying, "I feel conscious around Raymart in front of the camera."

Raymart, according to Claudine, was a revelation and everyone on the set expressed surprised at her husband's competence in doing heavy drama. Even highly-respected director Laurice Guillen commended Raymart's effort and dedication.

The program's production team declined to reveal Claudine's upcoming co-stars and leading men. But one name that came up during the press conference was action superstar Robin Padilla. Some of the actors being considered include Dennis Trillo, Richard Gutierrez, Dingdong Dantes and Claudine's ex-boyfriend, Mark Anthony Fernandez.

Catch the premiere of Claudine this Saturday, April 10, after Pinoy Records on GMA-7.