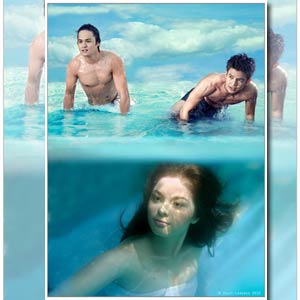 Andi Eigenmann's series, Agua Bendita, was last month's most watched TV program nationwide, based on the data submitted by global media specialist TNS (Taylor Nelson Sofres). This was revealed by a report furnished to PEP by the corporate communications department of ABS-CBN.

The heartwarming story of twins, Agua and Bendita, topped the national TV ratings with an average of 39.4 percent, according to TNS.

As posted in the TNS website, seven out of the top ten most watched weekday programs in March 2010 were ABS-CBN programs:

The same data also claimed that ABS-CBN dominated the weekend slot as well:

3. ASAP XV, according to TNS, still bested GMA-7's newly launched Party Pilipinas, which lost by four points. The former rated 18.5 percent while the latter got14.5 percent last March 28, the launch date of the Kapuso station's variety show every Sunday.

ELECTION COVERAGE. A separate survey, conducted by Pulse Asia between 21-25 February 2010, stated that more Filipinos found ABS-CBN's election coverage as the "most credible." The numbers were 63 percent for ABS-CBN versus 55 percent for GMA-7.

RADIO COVERAGE. Even ABS-CBN's AM radio station DZMM was said to have the biggest audience share, which was 22 percent, according to the February 2010 data gathered by Nielsen Mega Manila Radio Audience Measurement.

The same survey declared: DZMM TeleRadyo was also the number one cable news and information channel, and climbed to 24th spot among all cable TV channels, including CNN, BBC, Channel News Asia, Bloomberg, and CNBC.