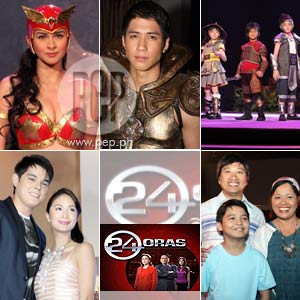 Six of the Top 10 shows of the first quarter in 2010 came from GMA-7. These were (top row, from left) Darna, The Last Prince, Panday Kids as well as (bottom row, from left) Full House, 24 Oras, and Pepito Manaloto.

GMA Network led in TV ratings in viewer-rich Mega Manila as of the first quarter of 2010, according to survey results from TV ratings data supplier AGB Nielsen Philippines.

Based on a report sent to PEP (Philippine Entertainment Portal) by the corporate communications department of GMA-7, the Kapuso network edged out competition with an average audience share of 37.2 percent, 1.3 percentage points higher than ABS-CBN's 35.9 percent.

During the quarter, GMA-7 had 15 entries in the list of overall top 30 programs. The Kapuso network's adaptation of Mars Ravelo's Darna, topbilled by Marian Rivera, took the top notch in the list with an average household rating of 32.2 points.

Six Kapuso programs made it to the top 10 ten shows in 1Q. Apart from Darna, other telebabad (primetime) programs that made it to the top 10 include the fantasy series The Last Prince starring Aljur Abrenica and Kris Bernal, the action-packed Panday Kids led by child actor Buboy Villar, the romantic comedy Full House topbilled by Richard Gutierrez and Heart Evangelista, banner newscast 24 Oras, and television's first reality sitcom, Pepito Manaloto.

Pepito Manaloto, the brainchild of comic genius Michael V, piloted with a rating of 7.5% last March 28, up by 11.3 points compared to its ABS-CBN competitor, Goin' Bulilit's 16.2%.

Meanwhile, including TV specials during the quarter, the latest bout of boxing's pound-for-pound king Manny Pacquiao against Joshua Clottey beat all TV programs with 37.9 rating points. The main event registered a household rating of 49.7 percent and an audience share of 81.3 percent in Mega Manila.

GMA-7 also kept its lead in another key area—Urban North/Central Luzon—where it led competition by 2.6 points in average channel ratings during the first quarter.

Chairman, President and CEO Felipe L. Gozon expressed confidence that GMA-7 will be able to increase the gap in TV ratings in Mega Manila and other key markets in the coming months. "We are confident that we will be able to once again widen the lead in TV ratings as we are set to launch new shows that will surely excite our viewers," Gozon was quoted in the said press release.

Among the programs set to launch on GMA-7 in the coming months include the Barbie Forteza-starrer Pilyang Kerubin, Survivor Philippines: Celebrity Edition with host Richard Gutierrez, Heart Evangelista's Langit sa Piling Mo, among others.