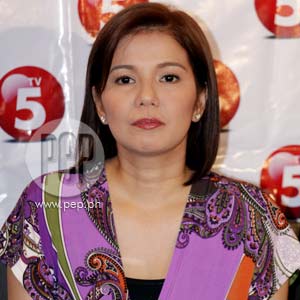 TV5's "talakserye" Face to Face has stirred public interest and support since its debut episode last March 22. The program, known for pitting feuding parties with the hope of reaching reconciliation in the end, is hosted by Amy Perez.

Face to Face, as described by main host Amy Perez, "brings together two opposing parties in a forum that aims to resolve misunderstandings by providing advice from counselors and opinions from the audience."

Other topics discussed include two mag-kumares fighting over their respective sari-sari stores competition, a guy engaged in a confrontation against three lesbians, an abused mother fighting against her annoying son and daughter-in-law, an angry group composed of gay beauty queens protesting over a stolen title, and much, much more.

Adding color to the show are the segments "Face-Off," "Facebuking," "Just Face It," and Amy-nan"—where the host express her own thoughts about the issue on hand.

MOTHER OF REALITY SHOWS. But while others eventually patch things up, some unfortunately refuse to reach an agreement both on and off cam.

"As much as we want all of our subjects to reconcile, wala din naman kaming magagawa if they don't want to," Amy mentioned to PEP (Philippine Entertainment Portal) during an interview conducted at Alex III restaurant in Tomas Morato, Quezon City.

Fans of the show labeled it as a worthy "guilty pleasure" while some likened it to a tragic car crash one just couldn't help but look at. Face to Face—in a time where reality shows are abundant—come across as the most genuine among the lot.

The scenes unfolding are no different from what's happening inside a cramped barangay hall or a small court room in any town or city. "Only that there's a camera documenting all the drama and tensed exchanges going on between the subjects," said Amy.

Amy acknowledged Face to Face's novelty feature as its top selling point. But there's nothing surprising in terms of public interest in watching feuding parties slugging it out for everyone to see.

Catch Face to Face daily from Monday to Friday at 11:00 a.m. with replays every late night on TV5.