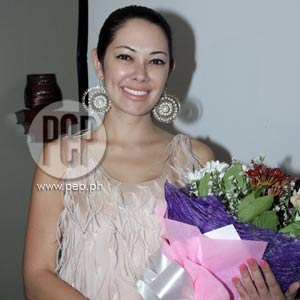 "I'm very excited kasi iba-iba ang ginagawa ko sa kanila. I'm sure there's a lot more in store for me and for the other artists as well," says Ruffa Gutierrez about her being featured on TV5's weekly drama anthology 5 Star Specials.

At the media conference prepared for the next featured star in 5 Star Specials, Ruffa said that is she looking forward to this project.

"Well, I'm very excited," she said. "Coming from Ms. Maricel Soriano, it's a big challenge for me na ako naman ang susunod. Siyempre, lahat kami. Siguro, team work din with the creative team. Ako, nagbibigay din ako ng input, our writers and the directors. Hopefully, it'll be so successful and we'll come up with good stories for everyone."

For five consecutive Mondays, Ruffa will play different roles each episodes—which include a miserable housewife, a prisoner-rape victim, an evil boss, a scar-faced lady who wants to make a revenge, and someone who sees ghosts. These episodes will be directed by popular TV and movie directors such as Joey Reyes, Laurice Guillen, Joel Lamangan, Eric Quizon, and Argel Joseph.

"You know, I wanna do more in terms of projects. Kasi, a lot of the movies I've done at mukhang cute naman sa akin, it's all comedy. I wanna be able to showcase also my abilities in drama, especially ang dami ko nang pinagdaanan lately. So, dito ko maiso-showcase 'yon," said Ruffa about her intention to let the public know what else she can offer as an actress.

For the first episode directed by Eric Quizon, Ruffa will be reunited with Zoren Legaspi after their team up in Shake, Rattle and Roll in the 2009 Metro Manila Film Festival.

She plays the role of Sally, a housewife who has forgotten to take care of herself because she was very dedicated in her small business. Soon, she'll find out that her husband (played by Zoren) is leaving her for a younger and sexier woman named Iris (played by Carlene Aguilar). However, with the help of a friend (played by Joanne Quintas), Sally will regain her self-confidence.

Find out how Sally will be able to win back her husband from Iris in the premiere episode of 5 Star Specials Presents Ruffa this Monday, April 26. It will air at 8:00 p.m. on TV5.