Eugene Domingo and Allan K team up for Comedy Bar 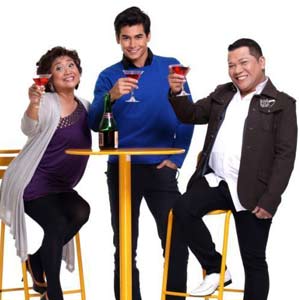 Doing live comedy feels like second skin for comedian-host and entrepreneur Allan K. That's exactly the reason why executives of GMA-7 did not have a hard time finding someone to host its new show titled Comedy Bar.

Bringing live comedy experience closer to the viewers, Comedy Bar mirrors the happenings one would expect in watching standup comedians doing their trade on stage. Despite the increasing popularity of stand-up comedy shows, many are still curious to see and know its entertainment appeal to the public.

The program offers spot performances and the usual musical comedy stunts. Allan is particularly happy with the thought that Comedy Bar will provide upstart comedians the chance to brandish their undiscovered talent. Many of our modern day comedians, of course, started out performing in bars and continue to do so for livelihood and to further hone their comic chops.

Comedy Bar, said Allan, will try its best to capture the entire elements essential during a stand-up comedy show and bring it on television.

Striking that balance between spontaneous bar jokes and censorship, however, will be a big challenge for everyone in the show. Stand-up comedy, as most of us know, is notorious for dishing out upfront jokes considered unacceptable in mainstream television.

"Siyempre sa bagay na 'yon titimplahin namin 'yon," mentioned Allan seriously. "But all in all we will deliver exactly what stand-up comedy shows are really like inside the bars."

Catch the debut episode of Comedy Bar this Saturday night, April 24, after Imbestigador on GMA-7.