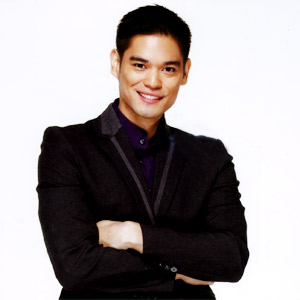 The local franchise of the hottest international dating show Take Me Out premieres today, April 26, on GMA-7. Take Me Out assumes the timeslot previously occupied by Dingdong Dantes's Family Feud.

Hosting the show is Patinum Prince of Soul Jay-R, who bagged the gig following an audition called by the Kapuso Network a few months back. In a previous interview with the singer, he mentioned to PEP (Philippine Entertainment Portal) how strict Freemantle Media—the owner of the Take Me Out franchise—is when it comes to protecting and maintaining the program's image from top to bottom.

Freemantle Media representatives reportedly even visited Jay-R during one of the tapings to check out the studio and the treatment being done by the network to the show.

Jay-R will play the role of matchmaker for a pool of 30 searching single ladies and one bachelor. Each of the ladies will have their own designated lighted podium. The bachelor must impress the ladies through any means possible with the help of a prepared VTR about himself along with live spontaneous remarks.

Impressed women must leave their podium lights on. Turning off the lights automatically means outright elimination from the competition. After three rounds, the bachelor finds himself choosing who among the remaining women he wants to go out on a date with.

Take Me Out will document the dates of its winners to update the viewers on the progress of the couples.

Prior to the Philippines, Take Me Out had successful franchises already in other countries like The Netherlands, Australia, Denmark, Spain, Sweden, and the United Kingdom. The show was a big hit in neighboring country Indonesia in 2009, where it reportedly garnered an impressive 2 million viewers when it was being aired.

Catch the debut offering of Take Me Out beginning today, April 26, on GMA-7.