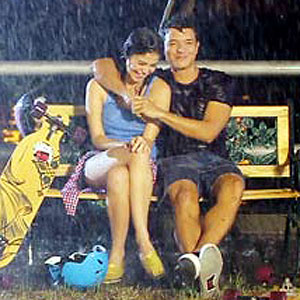 ABS-CBN's rainy season station ID piques the interest of viewers for its new tandems such as Anne Curtis and Jericho Rosales (both in photo). (CLICK HERE to view more photos)

In 2002, after its "Saya Ng Summer" station ID (yes, the one that started it all), ABS-CBN made a very interesting follow-up: a rainy season station ID. In those days, the idea was quite novel. Making one for summer is expected since it is a much-anticipated, festive (and commercially lucrative) season as Filipino culture and tradition dictate.

But to make one for a time of the year when we're always wary of an incoming typhoon, most likely to catch illnesses, or when even the most basic things like having our clothes dried or commuting to school or work give us much stress? That was unheard of, and maybe a little bit unnecessary.

But wet season hassles aside, we Filipinos of course have our melodramatic side that nurtures a love affair with the rain. In fact, we have a vast collection of sentimental Pinoy songs that romanticize rainy days.


And in 2002, ABS-CBN tapped into this emotional attachment to the season of downpours, and the "Sukob Na" station ID was born. Instead of havoc, diseases or horrendous traffic, the station ID reminded us of the things we enjoy about the season, equating rain with comfort, togetherness and love. And with that video of stars either playing in the rain outside or enjoying their bonding time indoors, warmth was given to the hearts of the viewers in those cold times, and ABS-CBN from then on owned the idea of having a rainy day season station ID.

That particular station ID is easily one of ABS-CBN's most memorable. It had a feel-good song by local boyband 17:28 that became sort of an unofficial rainy day anthem, plus touching Kapamilya moments that strengthened the Network's promise of being there for their viewers come rain or shine.

For quite some time, ABS-CBN never released another one of its kind, or if they did, it wasn't as memorable as their "Sukob Na" campaign. But this year, ABS-CBN promised to lead the country once again in welcoming the rainy season. And right on the first few moments of the 2010 rainy season station ID, we had the feeling that we'd heard that song before. And we were right.

Technically, it's not an ID for the entire network's programming. It's made for ABS-CBN's commemoration of the 60 years of the Pinoy Soap Opera. "Sukob na 2010" uses the same song, now interpreted by Aiza Seguerra, but with less R&B/Pop boyband and a more natural, subdued and acoustic feel. It features the lead stars of ABS-CBN's current and upcoming teleseryes.

The SID becomes surprising in this aspect. Although we're familiar with Xyriel Manabat from Momay, and Empress, Felix Roco and Matt Evans from Rosalka, our curiosity is piqued by the sudden pairing of Cristine Reyes with Zanjoe Marudo and Jericho Rosales with Anne Curtis. Some viewers might find it unusual that Gretchen Barretto, a high-society personality, is suddenly on a picnic mantle with Bea Alonzo. Soon, La Greta will finally star in her own teleserye titled Magkaribal. There's also the appearance of Kristine Hermosa with Piolo Pascual enjoying the rain with Zaijian Jaranilla (a.k.a. Santino). The matinee idol is currently busy shooting for the teleserye titled Noah.


One thing is clear: John Lloyd Cruz and Angel Locsin are now officially ABS-CBN's flagship love team, being placed on the important end frames. Fans of the two are looking forward to their upcoming fantaserye Imortal.


Given her pregnancy, it's understandable why ABS-CBN's declared "face of Pinoy Soap Opera" Judy Ann Santos is not included in this plug.

Forgetting all these issues about the personalities, the station ID still evokes the same heartwarming feelings we had when we saw the first version eight years ago. Again, the SID makes us forget everything we hate about the rainy season, and envelopes us with that certain mood of cherishing all that's good and beautiful about the cool and damp weather.

And technically, this ID is leaps and bounds better than the original. With its impressive visuals coupled with soothing music, it's such a joy and pleasure to watch, as comforting as a hot soup on a rainy day. Come on, whose heart will not melt with scenes like that of little adorable Momay playing in the rain? Beautifully shot and superbly directed, this ID makes you want to join the stars in playing, dancing and chasing each other under the calming raindrops.

In the end, the ID being a rehash (or in a more positive term, an update), even worked to its advantage. Like rediscovering old photographs or old records we used to like, it brings us back to past emotional moments and help bring a sense of nostalgia. And in the time of El Niño when we long begged the skies and the gods for rain, Sukob na 2010 shows us that the time we have been waiting for has come, and it is worth celebrating too, just like summer or Christmas.