Will the Big Six of PBB Teen Clash of 2010 enter showbiz? 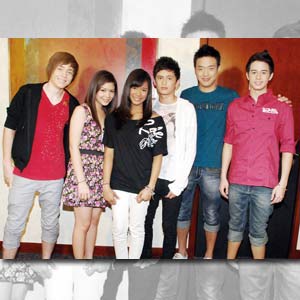 The Big Six of Pinoy Big Brother Teen Clash of 2010 (from left) Bret Jackson, Fretzie Bercede, Devon Seron, James Reid, Ryan Bang and Ivan Dorschner are open to opportunities that will come their way now that they are back in the outside world.

They may now be away from the cameras of the Big Brother house but expect to see more of Bret, Ivan, Devon, Fretzie, Ryan, and James as they enter a new chapter in their lives after PBB.

Bret, who is known for his singing and writing skills will soon become a MYX VJ. "It's my dream job," said the Indie Singer of USA. He also wants to do an album with his band in Dumaguete.

Ivan, meanwhile, has the potential to have a showbiz career, which is why he is preparing very hard for it. "I'd like to learn to speak more Tagalog. Also, I'd like to learn how to play the guitar," he said.

Fretzie, on the other hand, wants to ask her parents' permission first while Ryan wants to finish his studies. "That's what I'm in the Philippines for," he revealed.

Devon, on her part, revealed that she would like to be in any ABS-CBN show, if given a chance.

Big Winner James said he is open to explore the opportunities that have opened up for him. "Bret and I want to make an album of our original compositions," he said.

Whatever path they are about to take, all of them are thankful of the support of everyone who laughed, cried, got nervous, felt mad, or in love with the Filipino teens and the Filipino teens-at-heart of Pinoy Big Brother Teen Clash of 2010.