In My Life makes its TV premiere on Cinema One 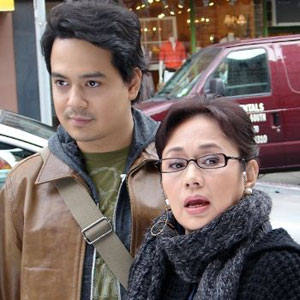 Topbilled by Star for All Seasons Vilma Santos, John Lloyd Cruz and Luis Manzano, In My Life is set to premiere on Cinema One's Blockbuster Sundays, July 18, at 8pm.

In My Life is a heartwarming story about family, friendship, love, and acceptance that puts the spotlight to Shirley (Vilma), a middle-aged librarian and single mother who accepted the invitation of her son Mark (Luis) to visit him in New York. With the help of Mark's lover, Noel (John LLoyd), Shirley tries to start a new life to get away from her problems while also trying to rekindle her estranged relationship with her son. But just when things are starting to get better for Shirley in the Big Apple, she slowly discovers a dark secret her son is keeping from her.

Directed by Olivia Lamasan, In My Life takes pride in bringing back Vilma Santos into the big screen after seven years of not making movies. To make it more special, "Ate Vi" was starred alongside Box Office King John Lloyd and her son Luis--a very first not only for the Star for All Seasons but for the two young actors as well.

In My Life is one of the most awarded films for 2009, bagging Best Actress, Best Actor, Best Supporting Actor, Best Director and Best Picture in several respected award-giving bodies. It received five awards from the 8th Gawad Tanglaw, seven from the 26th PMPC Star Awards for Movies, and three from the 41st Guillermo Mendoza Memorial Awards, among others.

Don't miss the Philippine TV premiere of In My Life on Sunday, July 18, on Cinema One and re-discover how the "relationship of two men teaches a woman to move on and live again."