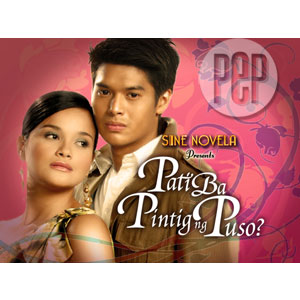 Yasmien Kurdi and JC de Vera topbill Pati Ba Pintig Ng Puso?, the ‘80s classic movie that has been serialized for television by the Kapuso network.

With director Gil Tejada Jr. at the helm, Pati Ba Pintig Ng Puso?, an original Sharon Cuneta-Gabby Concepcion movie, is a story of a young, naïve, servant maid Jenna (Yasmien) who falls in love with her master's grandson, Aldrin (JC).

Aldrin who fled to the United States several years ago to escape his scheming grandfather, returns to the Griego mansion. The manipulative Don Griego is pleased that his grandson, whom he considers as the only heir of his wealth, will finally take over and be in charge of his business empire.

Unknown to the patriarch, Aldrin's reason for coming home is to find out what really happened to his sister Mabelle (Chynna Ortaleza), who has been admitted to an asylum. The selfish and repressive Don Griego even arranges for Aldrin to marry Agatha (Karel Marquez), a daughter of another wealthy businessman, to broaden their business empire.

However, the free-spirited Aldrin meets Jenna, a maid who happens to be the best friend of Mabelle.

To spite his grandfather as well as assert his independence, Aldrin convinces Jenna to elope with him under the condition that their marriage will only be in paper. Aldrin believes marrying a servant is something Don Griego would never accept. He plans to use Jenna as his escape from being manipulated and controlled by his repressive grandfather. Since Jenna truly likes Aldrin, the servant agrees to marry her master.

But will the domineering Don Griego yield to this marriage between his grandson and their maid? Will Mabelle be able to come back to her senses and explain the reason why she suddenly stopped talking? And now that she is a member of the family, will Jenna stand up against the autocratic patriarch? Or will she allow Don Griego to run her life as well?

Click MORE PICTURES to view the cast members of this TV remake.