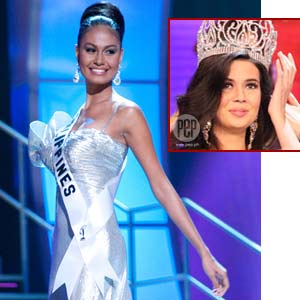 "I'm sure Melody would've wanted me to continue the fight for the crown thus, I dedicate this Miss Universe to her," says Bb. Pilipinas Universe 2010 and Philippines' Miss Universe 2010 bet Venus Raj about her friend and one of her mentors Bb. Pilipinas-International 2009 Melody Gersbach who died Saturday morning, August 21, from a vehicular accident together with two others.

From dethronement to fighting for her crown, Miss Philippines Venus Raj faces yet another challenge in her quest to win the title Miss Universe—dealing with the sudden loss of her good friend Bb. Pilipinas International 2009 Melody Gersbach.

Venus learned of the shocking news that the Fil-German beauty queen, together with two other companions, was killed in a car accident en route to Naga, Camarines Sur, during her rehearsal break at the Mandalay Bay Resort and Casino where she instantly burst into tears and felt very devastated.

"She is really the one who pushed me to join Bb. Pilipinas," recounted Venus in an interview with Dyan Castillejo in Las Vegas and aired on TV Patrol.

Despite being down and distracted with the loss of Melody, whom she considers as one of her mentors, Venus is trying her best to remain in focus and got even more determined to win the crown.

"I'm sure Melody would've wanted me to continue the fight for the crown thus, I dedicate this Miss Universe to her," she told Dyan.

Since Venus arrived in Las Vegas, Filipinos worldwide have been following her every move with reports filed by Dyan Castillejo in TV Patrol, Bandila, Umagang Kay Ganda, The World Tonight, News Central and even live updates via her Twitter account.

Will Venus be triumphant and be chosen as the most beautiful woman in the universe?