Past and present castaways unite for the launch of Survivor Philippines: Celebrity Showdown 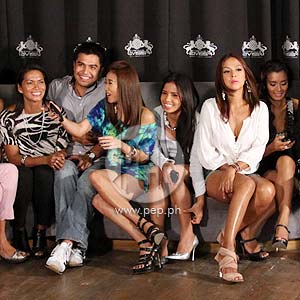 Some of the celebrity castaways this season engage in a little chit-chat before the episode premiere. (From left) Elma Muros, Doc Ferds Recio, Karen delos Reyes, Aira Bermudez, Aubrey Miles, and Michelle Madrigal.

Held last August 30 was a night of camaraderie and fun for the cast and crew of Survivor Philippines: Celebrity Showdown for the show's launch party at Eivissa Super Club in Quezon City.

Brazilian model-turned-actor Akihiro Sato and comedian Pretty Trizsa were sick that day so they were not able to attend.

Host Richard Gutierrez was present with his family, namely his parents Eddie Gutierrez and Annabelle Rama as well as his sister Ruffa and twin brother Raymond.

At around 8 p.m., all the guests crowded around several monitors strategically-placed in the night club. GMA-7's third edition of this reality TV franchise was shot in a remote island located off the Andaman Sea in Thailand.

Cheers erupted when the opening credits of Survivor Philippines: Celebrity Showdown began to play. No one talked to each other; it was even hard to interview the celebrity castaways because their eyes were glued on the TV screens.

The celebrity castaways expressed their happiness for getting the chance to finally watch the series that they worked hard for. Ervic Vijandre, one of the male celebrity castaways, told PEP (Philippine Entertainment Portal) that he was happy with what he saw. "Masaya," he said. "Ito na 'yon. This is it, parang ganun."

After the episode ended, the launch party turned louder and wilder as everyone celebrated the night away with music, dancing and good food.


According to data from AGB Nielsen, the pilot episode of Survivor Philippines: Celebrity Showdown registered a rating of 18.2% among Mega Manila households. It was able to beat its counterpart show on ABS-CBN, Noah, which registered 12.8%. According to data from Kantar Media (formerly TNS), the GMA-7 reality show got a rating of 27.4% among national households compared to the 35.7% of the Piolo Pascual-starrer Noah.