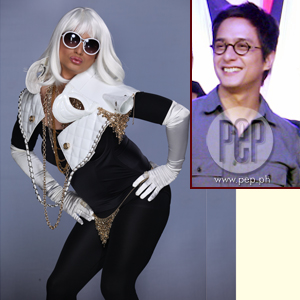 "Ang ganda-ganda ko rito!" says Ryan Agoncillo (inset) about his new character "Lady Dada" (main photo). In this TV5 mini-series, Ryan disguises himself to be able to become close to his ex-wife and son.

What happens if geeky-look Ryan Agoncillo gets dressed in drag on the glitzy bar's catwalk? Ryan can be considered the most gorgeous man in drag when he stars in the weekly series Lady Dada starting this Wednesday, September 8, 8-9 pm on TV5's Primetimes5.

The series taps the wacky side of Ryan, a departure from his mestizolooksand cultured ways.

"Ang ganda-ganda ko rito!" he quips. "I never imagined myself dressed in drag before. This one's for the books seriously," says Ryan who was joined by Lady Dada's other cast members, director and production designer in their press conference held last August 27 at Ratsky Morato, Quezon City.

Lady Dada tells the story of hard luck Dindo (Ryan Agoncillo) who barely succeeds in every business and job he gets into. His failures eventually ruined his marriage with Rina (Mylene Dizon). After a series of unfortunate events, he proves to be a bad luck magnet as he was restrained to get near his son Miko; this after he became violent in a bar owned by his wife and her ex-suitor Brian (Ryan Eigenmann).

Macario, his closeted high-school best friend, enters the picture in literally gay fashion as Kylie (Keempee de Leon) to the rescue. He convinced Dindo to mask his identity as a pretty woman and audition to be the next drag queen in Rina's bar. In order to get closer to his wife and son, Dindo is left without a choice but to turn from a man to a woman to a drag queen. His female disguise becomes even more awkward when he is courted by Rina's widower brother Henry (Roderick Paulate).

Ryan goes back to acting via Lady Dada after several months of focusing on his career as host. Before hosting TV5's two year-old flagship show Talentadong Pinoy, he has topbilled several TV series and movies including two blockbuster marriage-themed movies with reel-and-real-life wife Judy Ann Santos-Agoncillo.

Mylene and Keempee are both thrilled as Lady Dada mark their first appearance in a Kapatid show. Meanwhile, Dick's widower/suitor role is his TV comeback after winning as councilor in Quezon City last elections. He was first seen in a Kapatid show via 5-Star Specials Presents Maricel Soriano last March. Ryan Eigenmann, Edgar Allan Guzman, and Nathaniel Britt (as Dindo's son Miko) complete the cast. Ryan and Nathaniel, however, were unable to attend the presscon.

Will Dindo get around the persistent courting of Henry (who is actually his brother-in-law)? Could he pass for the next drag queen in town? How long can he hide his real identity?