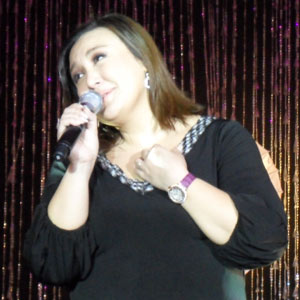 Megastar Sharon Cuneta maybe saying good bye to her Sharon show, but she'll be returning soon with a new show titled Star Power: Sharon's Search for the Next Female Pop Superstar airing in October. It will be co-hosted by Erik Santos and Christian Bautista.

During the August 31 two-part taping of the final episodes of Sharon at the Oasis along Aurora Boulevard, Megastar Sharon Cuneta admitted to having "separation anxiety" over the ending of her talk/musical variety show thats been on the air for the last 5 years in ABS-CBN.

"Buti na lang andyan si Superman," Sharon chuckled on air referring to husband Sen. Francis "Kiko" Pangilinan, seated in front of the audience, who for seven nights before her last taping day was there to support his wife.

"For a week, each night, she would cry on my shoulders because of separation anxiety towards the show," Kiko relates. When asked what she felt upon finding out that the show was going off air, Kiko admits, "She was ambivalent."

That night, Sharon also revealed her newest TV show Star Power: Sharon's Search for the Next Female Pop Superstar that will air in October as a replacement, co-hosted by Champions Erik Santos and Christian Bautista.

In 2004, Sharon took a one year leave of absence after giving birth to daughter Miel. The musical variety show resumed in 2005 and in 2008 the network reformated it into a talk show, eventually bringing it back as musical variety/talk show. In the last two years The Sharon Show infused "comedy bar themed acts."