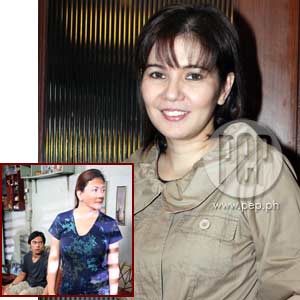 Amy Perez chronicles in details every angle of the stories featured in Face to Face via Untold Stories. The show's first episode titled, "Kabit na Dikit nang Dikit," will feature Dina Bonnevie, Jay Manalo, Glydel Mercado, and Jay Manalo. It will air on TV5 this Thursday, September 9, from 8:00 to 9:00 p.m.

The surprising success of TV5's "talak-serye" Face to Face has changed, even challenged, the landscape of Philippine television.

Since its debut on March 22, 2010, the Amy Perez-hosted show has significantly altered the way Filipinos treat both talk shows and reality-based programs: no frills and gloss, only facts and true drama based on real life situations told before a national audience.

The criticism that the show is just a rip-off of the American syndicated television tabloid talk shows like The Jerry Springer Show and Maury was also brushed off by the program manager.

Amy agreed, saying that the program leans more on the public service genre rather than entertainment mainly because they tackle real problems (both mundane and major issues) experienced by common people.

GIVING THE FULL STORY. As intriguing and interesting the details revealed during the actual show are, there are still a lot of back stories about the subjects that are yet to be told.

To give a bigger and clearer picture of the issues at hand, the team behind Face to Face has decided to dedicate a separate program presenting the entire tale of some of the featured stories as seen by the viewers.

The stories featured in Untold Stories are based both on the ratings accumulated when the episode was aired and the gravity of the topic and its audience effect.

"Untold Stories handpicks the most explosive and sensational episodes of the landmark reality-talk show to retell each story from root to tip. It also gathers some of the country's top actors to give life to genuine characters and stories in their most compelling performances yet," said the show's publicity write-up.

Aling Nelly (Dina Bonnevie) is a reserved wife who is married to a womanizer named Mang Denio (Jay Manalo). He supports his mistress Lisa (portrayed by Glydel Mercado) in one of their apartment units. Both Aling Nelly and Aling Lisa took turns with the same man for a period of time until the real wife became tired of the setup. Aling Nelly finally decides to throw out mistress out of the apartment. The move, however, doesn't guarantee that they will no longer share the same man. Aling Nelly's problems become even more complicated when she discovers that her son Caloy (Carlo Aquino) is involved with the same woman.