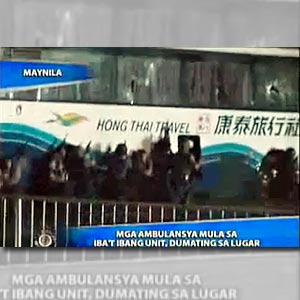 The August 23 hostage-taking incident at the Quirino Grandstand prompted GMA Network to review its set of ethical and safety guidelines for future crisis coverage.

After a thorough review immediately after the coverage of the hostage crisis last August 23, GMA Network is releasing an improved set of ethical and safety guidelines for future crisis coverage. These elaborate on existing policies contained in the network's ethics manual.

GMA News and Public Affairs has said it is open to dialogue with authorities on how they can coordinate during situations such as the August 23 hostage crisis.

Below are GMA Network's revised set of ethical and safety guidelines for crisis coverage:

1. Exercise extra care in airing live interviews and live coverage during hostage and other situations that involve law enforcement operations that are risky to our field personnel, those involved in the incident (e.g., hostages and hostage taker), and the public. Always be aware that lives may be at stake.

2. In the event of live coverage, avoid revealing in video and audio the plans, positions, movements, weapons, and preparations of law enforcers.

3. Avoid interviewing or otherwise talking to hostage-takers, potential suicides, and other subjects of imminent law enforcement operations. Decline police requests to negotiate or otherwise mediate with the above except for extraordinary reasons and cleared with top management.

4. Never portray as acceptable the actions of hostage-takers, potential suicides, and other subjects of law enforcement operations.

6. Assume that regardless of demeanor of hostage-taker or gunman, he is unstable and dangerous, and may have intent to kill.

7. Assume that police may not be able to handle media or a crowd. Thus we must know when and how to restrain ourselves.

8. Assume that children will be watching so we must make an effort to avoid graphic speech and video that could be disturbing to the viewing public.

9. Explain to viewers why certain information is being withheld.

10. Avoid airing announcements of fatalities until verified by authorities on the record and/or notification of next of kin.

12. Assign professionals in our organization to focus only on the ethical, safety, and non-technical aspects of our coverage during crisis situations and give immediate feedback to decision-makers when the coverage threatens to violate our standards for safety and conduct. Safety officers and news managers can be deployed to check on the safety preparations of field personnel.

13. When possible, coordinate with the authorities when a crisis situation occurs, thus creating an opportunity for the authority to relay information vital to our safety.

14. Avoid unnecessary risks. The safety of personnel, the public, and those directly involved in the incident is paramount. No story is worth sacrificing lives for.