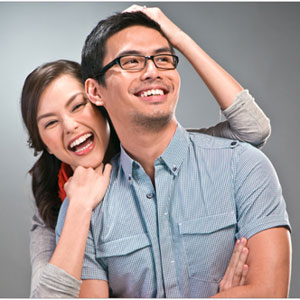 The promising team-up of Christian Bautista and Carmen Soo is now ready to grace the newest offering of Your Song titled "Beautiful Girl" starting September 12 on ABS-CBN.

The Asian Pop Idol and the Malaysian Sweetheart, both seen on Christian's music video of "Afraid For Love To Fade," are now set to bring their love team to a higher level in their newest project together, which was generally shot in Malaysia.


"I think the first thing that struck me about Christian is that he's such a gentleman and he's a very nice guy. We share something in common and it's fun working with him," says Carmen about her leading man.

"Actually, she's not pretty...she's beautiful! Very beautiful. Inside and out. She was easy to work with. Walang arte. Whatever we suggest she just does it," says Christian about Carmen.

A story that revolves around fate, letting go and falling in love again, Your Song presents Beautiful Girl is about a Malaysian girl played by Carmen who lost her boyfriend.

Her Malaysian boyfriend's heart was donated to a Filipino, portrayed by Christian Bautista, who has a major heart ailment.

As fate continues to conspire on their behalf, Carmen will eventually see the image of her boyfriend through Christian.

Trapped between letting go of the past and falling in love with a different person, Carmen finds her way back into love while throwing away bit by bit all the remnants of her past.

Christian, whose singing career is indeed flourishing, not only here in our country but also in Asia, admits that acting in Your Song presents Beautiful Girl is not easy for him.

"I took an acting workshop a few weeks ago just to refresh myself again. But this is a challenge for me 'coz it's been a while since I acted so I have to make it good, I have to make it real. Let's face it, I am a singer and I have done a few acting stints before, but it's like you have to remember again how you do it. Because you can only be good in one thing if you keep on doing it," says the Asian Pop Idol.

"This is actually a heavy drama, a different story of love and serendipity. I actually fell in love for the story and I know that viewers will be falling for it too," says Malaysian actress Carmen Soo.