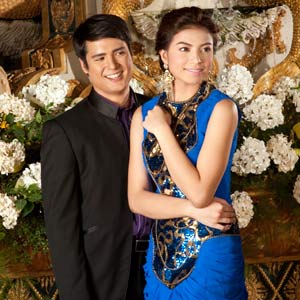 Glaiza de Castro and Geoff Eigenmann give life to the untold story of Cinderella's evil stepsister named Grazilda. The two stars, who are paired for the first time, are both excited with the opportunity to work outside their comfort zones. CLICK HERE to view photos of Grazilda's cast members

GMA-7's newest primetime fantasy series Grazilda should not be mistaken for as a modern revival of the classic fairytale Cinderella.

Although the heart of the story, as well as the basic foundation of the plot, was inspired by the well-loved ancient folk tale, the Glaiza de Castro starrer is a certified original story conceptualized by the creative team of the Kapuso network.

This time, the focus of the story shifts to one of Cinderella's hated stepsisters in Fantasia named Grazilda.

She went on to describe the series as a "fresh take" on the entire Cinderella legend.

Coming from a string of villain roles—as witnessed previously in Stairway to Heaven and Diva—Glaiza had to adjust her kontrabida instincts to successfully play a protagonist in another world.

On the day of Cinderella and Prince Charming's wedding, Grazilda makes a scene in an attempt to disrupt the ceremony. The incident prompts Fairy Godmother (Jolina Magdangal) to punish the feisty stepsister and sent her to the mortal world to suffer a life far from what she knows.

It is while in the mortal world that Grazilda meets her long-lost father, Fernando (Joel Torre), as well as her evil stepmother Veronne (Cherie Gil), and mean stepsisters Cindy (Yasmien Kurdi) and Tonette (Stef Prescott).

Grazilda's new world offers a reversal of fortunes as she now finds herself being maltreated in and even outside the household.

The disowned daughter of Funtasia transforms from a cruel lady to a kind-hearted yet courageous individual. Curiously, Grazilda's means to return (which is in the form of a snowball) to her hometown is in the possession of Veronne.

It also in the mortal world where Grazilda will meet her new Prince Charming in the person of a rich but unassuming guy named Eric (Geoff Eigenmann).

More than just a fairytale take, Glaiza cited Grazilda as a story highlighting redemption, transformation, and the values of forgiveness and love.

Catch the premiere episode of Grazilda tonight, September 13, on GMA-7.