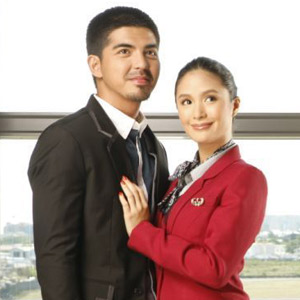 Rigo (Mark Herras) and Marj (Heart Evangelista) are headed to Macau for a vacation but it will be ruined by Aurora (Katrina Halili, not in photo). Will the lovers have a happy ending in Langit sa Piling Mo.

After taking viewers on a fascinating journey into the world of airline employees, Langit Sa Piling Mo makes its final touchdown on the runways of Philippine primetime on Friday, September 17. See what will happen to the characters of Heart Evangelista and Mark Herras in GMA-7's original drama series.

Finally, after her long and arduous search for Candy (Ryza Cenon) and Felix (Jay Aquitania), Marj (Heart Evangelista) realizes her long-time dream of reuniting with her beloved siblings.

Candy stands by her decision of keeping her unborn child with Stanley (Tonton Gutierrez), while Felix, on the other hand, vows to leave his rebellious days behind.

Following their romantic airport wedding, newlyweds Marj and Rigo together with their family and friends jet off to Macau for a vacation, while being totally unaware of the tragedy that awaits them.

Disguised as a flight attendant, Aurora (Katrina Halili) secretly joins Marj and Rigo on their flight with another one of her evil plans in mind. On the verge of losing her sanity, she threatens to kill anyone who will cross her path.

Will Marj and Rigo's newfound bliss turn into a tragic existence all too soon? Will they be able to fulfill their destinies together, or apart?

Don't miss the heart-stopping finale of Langit Sa Piling Mo as it takes flight one last time this Friday, September 17, before 24 Oras on GMA Telebabad.