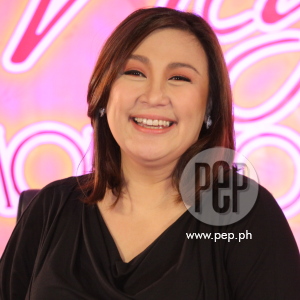 Sharon Cuneta says her three new TV shows will keep her so busy she won't have time to shoot a movie this year. "Wala po. Kaya next year na yung movies. I will start [shooting] my first movie in February. For Star Cinema... hindi pa po alam ang title."

Sharon Cuneta has three upcoming TV shows this year: Star Power and The Biggest Loser Pinoy Edition on ABS-CBN, and Sharon at Home on the Lifestyle Network.

Of the three, she's most excited about Star Power, a reality show searching for female superstars, which will premiere on October 10.

The Megastar talked about her experience in Star Power during a presscon for the three shows held September 9 at ABS-CBN.

The Megastar said they already picked the show's 12 finalists, collectively called the "Star Power 12," from thousands of auditionees from Luzon, Visayas, and Mindanao.

Sharon's role in the show is all-encompassing: She's judge, mentor, and host, all-in-one.

She said being a judge was "one of the most difficult things I've ever had to do." While ABS-CBN executives helped her in the judging panel, she always felt bad when a contestant was sent home.

She explained, "All in all, 37 ang napili from Luzon, Visayas and Mindanao. They auditioned from among thousands. Napakahirap to narrow them down to 37. So pagdating namin do'n, ang hirap kasi they were already the best. Sabi nga ni Mr. M (Johnny Manahan of Star Magic), it was such a good crop of talents. Ang hirap pumili, yung pag pinasok mo lahat, puwede. Kaya lang, we had to really pick 12.

However, she was excited about mentoring newly-discovered talents.

"Excited na excited ako i-mentor yung iba. Kasi ang kaibahan ng show na 'to compared sa napakaraming talent shows spread all over many stations is that ako yung magme-mentor sa kanila. In over 30 years, I think I've been everywhere and I've done everything. It's really time to give back to a group that I think has been supportive of me. These kids should be given a chance."

She explained the mentoring process. "Every week, merong mae-eliminate. Then we will choose five. Yun talaga yung out and out mentoring namin, dun sa kanila babagsak. In the end, isa dun yung magiging pinaka. Pero hopefully silang dose, may career sila after the show."

Sharon said she aims to inspire kids to be more confident. She told the story of a contestant who had regained her confidence with her help.

ON WILLIE REVILLAME. Since Star Power will premiere on October 10, this will be be pitted against Willie Revillame's upcoming show, Willing-Willie Kami.


During the press conference, the Megastar opened up about her previous tiff with Willie, the host of ABS-CBN's now defunct noontime show Wowowee.

Last year, she was promoting her movie BFF (Best Friends Forever) when she appeared as a guest on Wowowee. In that particular episode, the Megastar asked Willie to invite her on his yacht. The TV host replied: "Ayoko nga. Baka lumubog."


Sharon at Home will air 6:30 p.m. starting September 18 on the Lifestyle Network. Star Power premieres on October 10 and The Biggest Loser Pinoy Edition will be shown next year on ABS-CBN.