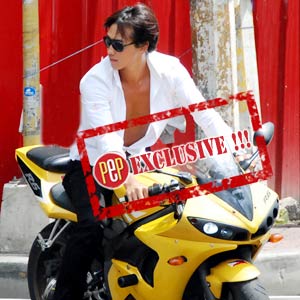 Jung Ji-Hoon or simply, Rain, shoots scenes for his coming TV series Fugitive in a busy district of Manila, following his successful Intensity concert at the SM Mall of Asia Concert Grounds in Pasay City.

The 28-year-old singer-actor staged a concert, dubbed Intensity, held the previous evening at the SM Mall of Asia Concert Grounds in Pasay City.

Filming started at around 10:00 a.m. until 12 noon, WSC said. He overheard that the production team was heading off to Manila's port area to shoot additional scenes before wrapping up the day's work.

Rain was shooting scenes for his upcoming Korean action-drama series titled Fugitive. Local network TV5 has secured the rights to air the program in the country and will run the series under the title Runaway.

Rain first arrived in Cebu on September 1 to shoot scenes for the series. Since then, the cast and crew have been seen filming in Cubao in Quezon City, Greenhills in San Juan, and Roxas Boulevard in Manila.

Also in the country are Fugitive cast members Lee Na Young, Lee Jungjin, Yoon Jin Seo, and Hollywood actor Daniel Henney. Local media got a chance to meet the stars last September 9 during a press conference at the Champagne Room of the Manila Hotel.

The television series has brought the cast to Asian countries like Japan, Macau, and Hong Kong.

The Fugitive tells the story of a private investigator named Ji Woo, played by Rain, who solves the mysterious death of an Asian couple in the glitzy city of Las Vegas, Nevada, U.S.A.

Action picks up when a large amount of money, dating back to the Korean War, resurfaces, leading to a frantic chase around the globe. Romance among the characters complicates matters.

(CLICK HERE to view photos taken on the set of Fugitive)