Charice is the new kid on Glee Season 2 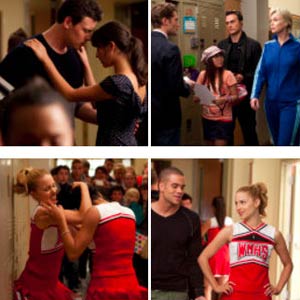 Aside from featuring the guest appearance of Filipina singer Charice (wearing hat on upper right frame), Glee Season 2 will also have Javier Bardem, Britney Spears and John Stamos as special guests. Learn about the new songs, new plots and new characters in Glee Season 2 when it starts airing in the Philippines on September 22.

The inclusion of Charice in the hit U.S. series Glee has generated excitement among Filipinos for the return of the struggling high school choir on television.


The Filipina pop singer is cast as Sunshine Corazon, whom she described in interviews by saying, "She's an exchange student from the Philippines, and she's going to be a frenemy of Rachel Berry." Meghan Carlson of buddytv.com predicts that Charice's rendition of "Listen" from Dreamgirls is "a #1 iTunes track just waiting to happen."

Starting Wednesday, September 22, viewers in the Philippines will be able to catch all new episodes of Glee, a show that has earned awards from the Golden Globe, and Screen Actors Guild. It will be aired at 4 pm via satellite on both Jack TV and ETC, with a primetime telecast at 9 PM.

First launched in September 2009 in the Philippines, Glee, a show created by Ryan Murphy (Nip/Tuck & Eat, Pray, Love) fuses comedy, music, dance and drama into its hour-long episodes. Following the ambitions of a group of misfits that hope to one day win the National Glee Club Competition, Glee has been proven a hit with audiences here and abroad.

With each character dealing with their own inner struggles, the show delivers the important message that it's okay to be different. From the domineering wannabe, the singing quarterback, the stuttering goth to the wheel chair-bound chauvinist, no character is perfect yet you will fall in with love them anyway.

Season 2 picks up where the last left off with the glee club New Directions hoping to make sectionals once more. With auditions being held in the first episode who will make the cut and who won't?


McKinley High is faced with even more budget cuts, which is why Mr. Schuester (Matthew Morrison) encourages the kids to help recruit new members for the club. Rachel (Lea Michele) and Finn (Cory Monteith) disagree on new recruits, and aren't sure they will be able to come together in perfect harmony.

Guest appearances set for season two include Javier Bardem, Britney Spears, John Stamos the return of Kristen Chenoweth, Idina Menzel and Jonathon Groff, and, of course, our very own Charice. Another face to look for is Jack TV and ETC's Glee off to Hollywood winner Hazel Faith De La Cruz who won a walk-on role during the second season of Glee.

Glee Season 2 premieres this Wednesday, September 22, at 4 PM via satellite with a primetime telecast at 9 PM on cable channels Jack TV and ETC.