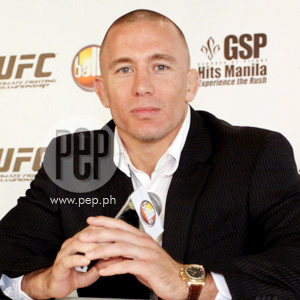 UFC Welterweight Champion Georges "Rush" St-Pierre is in the country for his MMA event dubbed GSP (Georges St-Pierre) Hits Manila: Experience the Rush. He is also here to promote his upcoming fight against challenger Josh Koscheck in UFC 124 in December to be aired locally by Balls Channel SkyCable 34.

Georges St-Pierre or GSP as his hordes of fans call him, is a French-Canadian mixed-martial arts (MMA) fighter. He has been holding the UFC Welterweight Championship belt since 2008, after snatching it back from American Brazilian Ju-Jitsu fighter Matt Serra in UFC 83.

GSP first won the belt from champion Matt Hughes back in 2006 in UFC 65 after an impressive TKO (technical knockout) finish on the American freestyle fighter. He held the belt for barely a year before Serra defeated him via a surprising KO (knock out) on round 1 of their championship match in UFC 69.

After going back to his camp to train and defeating wrestler Josh Koscheck in UFC 74 and Hughes in UFC 79 on his road to the championship match with Serra, he regained his belt and has been undefeated since then.

He is now preparing—and promoting—his return match with Koscheck this December in UFC 124. Back in the U.S., he is also part of the MMA reality show The Ultimate Fighter Season 12 aired on Balls Channel SkyCable 34 every Wednesday night with replays on Thursday mornings. He is the coach of Team GSP who will go against Team Koscheck coached by his UFC 124 challenger.

GSP is ranked number 1 pound for pound fighter by Yahoo! Sports and number 2 by mma website Sherdog.com. He has also won several "fighter of the year" awards from different MMA and sports organizations since 2008.

COMING TO THE PHILIPPINES. At the press conference held today at the 9501 Restaurant in ABS-CBN, Georges said he was very surprised at the reception he received when he arrived this morning from the U.S. However, it was his turn to surprise the Filipino press and fans present at the presscon when he greeted everyone in Tagalog.

"Kumusta po kayo?" said Georges, which won applause from everyone in the room. "I've been practicing a lot my Tagalog. Hopefully, one day, I'll be able to speak or have a conversation with one of you guys."

Being French-Canadian (he was born and raised in Quebec, Canada before moving to Montreal for work), his English is a bit broken and spoken with a French accent. GSP said that his first trip to the Philippines has been a very exciting one for him since this is the first country he has ever visited in Asia.

"What a great experience it is, so far. I've been welcomed very well every where I've been, and thank you for everything. I didn't know how popular was the sports of mixed martial arts in here. When I just arrived at the airport, I couldn't believe my eyes.

"It's a great country, a great culture and I'm honored and glad to be with you here today. Thank you very much!" Georges said.

Among the topics discussed in the presscon were the possibilities of staging a UFC card in the Philippines, GSP's possible match with current UFC middleweight champion Anderson "The Spider" Silva, and his upcoming rematch with Josh Koscheck.

Mark Fischer said the first things on their list of things to do after setting up an office in Asia (he is based in China), is to create awareness first of the mma brand via media exposures, find fighters from this region to fight in UFC cards and definitely to hold UFC matches in the near future.

Georges answered the GSP vs. Silva question: "The famous question everyone asks me, when am I gonna fight Anderson Silva. It's more complicated than it looks like."

"I've seen it before on boxers," he said. "You can clearly see they are very successful when they go up. But when they come back down [to a lighter weight], most of the time they have problems readjusting. Because when you go up in weight class and you go back down, first it is not healthy to play with your body like this [going down on weight]. Also it mixes up your reaction time. Reaction time is very important in combat sports. Because that's what makes you react to your opponent's move. And sometimes, something bad could happen [because of poor reaction time].

"So if one day I do go up in weight, I'm gonna make sure it's at the right time of my career." GSP went on to say that when he finally make the transition to go up in weight, he will just try his best to keep on winning until he meets up with the champion, and by that time, he's not sure if it's going to be Silva or a new champion. But what's sure is he is not going back down.

"Right now, my division is pretty stacked and I just have to keep on winning first, until I decide to go up in weight," Georges continued.

As for his upcoming match with Josh Koscheck whom he beaten in UFC 74 back in 2007, Georges said he is well-prepared for his fight with him and knows how to shut down Koscheck's attacks.

"I know he wants me to be angry at him and commit mistakes." Koscheck has been bad mouthing him and throwing insults at him even before their The Ultimate Fighter show. Georges said he is not just out to win, but to show the result of the preparation he did for his fight.

ON BOXING AND MANNY PACQUIAO. As a boxing fan, GSP also said good things about Filipino boxing champion Manny Pacquiao's trainer Freddie Roach. He trained under Roach for a time and was amazed at how the famous boxing coach "schooled" him on the fine points of boxing.

"Before Freddie Roach, I thought I knew everything about boxing. But after I met him, I realized I didn't know nothing. He really brought me back to school. He really brought me to another level. He is so technical. And if I follow what he says regarding boxing perspective, there is no way I could lose, if I follow what he says. I felt my boxing improving just by working out with him in Los Angeles [California, U.S.]," GSP said more about Roach.

Since the topic is about boxing, Georges was asked for his opinion who would win if ever there is a Manny Pacquiao-Floyd Mayweather Jr. fight. The MMA champion picked Pacquiao.

Georges poointed out that Mayweather is ducking Pacquiao because the garrulous American boxer thinks he has a lot to lose if he fights the Filipino boxer. "But I think he should fight Pacquiao for the fans. They really want to see that fight."

And his reason why he picked the boxer-turned-Congressman: "I think right now Pacquiao is really untouchable. And if they fight like tomorrow, I think Pacquiao would win."

Tomorrow, September 24, Georges will have a guest appearanceon Mornings@ANC and on ABS-CBN's talent search Showtime.