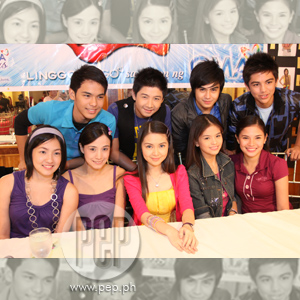 These tweens are ready for the eight-part episode of Tween Hearts, which features an endearing storyline and characterization, intriguing plots, and universal theme for all ages.

THE TWEENS' CHARACTERS. After many years of separation, Bambi (Barbie) is finally reunited with her mom Irene (Sylvia Sanchez) and older sister Belinda (Bea). She lived a simple life with her father Ted (Emilio Garcia) in the province while Belinda experienced a luxurious lifestyle with Irene in the city.

The differences between Bambi and Belinda ignited further tensions which are also triggered by the special attention given by Irene to Bambi to make up for the lost time they were not together.

Belinda finds comfort in the arms of Jacob (Jhake) known as one of the school's outcasts. Jacob offers reassuring words to Belinda which later on develop into a special friendship between the two.

Aside from Bambi's newfound home, she also transfers to Belinda's campus where she meets a new batch of friends including Luisa (Louise), Aya (Joyce), and Jacob. Adding spice to her school life are Leslie (Lexi), Chris (Kristoffer), Rick (Derek) and Josh (Joshua).

Aya, Leslie and Chris form a love triangle which will spice up the show even more.

Josh is widely known as the over-achiever on campus. He spends more time alone and often rejects the rules imposed by his sister Rose (Roxanne Barcelo).

Nothing can get in his way except Bambi who softens his heart and strong persona.

TWEENS IN TROUBLE. Trouble starts when Rick, Belinda, and Leslie organize an underground victory party to celebrate the championship won by the school's varsity team led by Chris (Kristoffer). Even the school's outcasts headed by Bambi, Jacob, Aya, and Luisa arrive at the party.

In the middle of merrymaking, a commotion erupts. It's the troublesome Josh who starts it all yet everyone is reprimanded and the school elders order them to attend a recollection as punishment.

The students think it's just the usual recollection, but they get the shock of their lives when they discover that the affair involves various activities that will test their strengths, weaknesses, emotions, and way of thinking.

What will happen to these bitter sisters? Will an earnest apology be enough to heal the wounds that ripped them apart? Will Bambi become the perfect tool to warm the heart of the bully Josh? Will the music geek Jacob be able to tame the spoiled brat Belinda? Who will win Chris's heart? The "queen bee" Leslie or the eccentric Aya? Who will end up victorious in the never-ending battle between Luisa and Rick?

To prepare for their roles, the entire cast took extensive workshops and trainings facilitated by the episode's director Gina Alajar. Kit Villanueva-Salcedo heads the pool of scriptwriters for the show with Roy Iglesias as Senior Creative Consultant and Denoy Navarro-Punio as Creative Consultant.