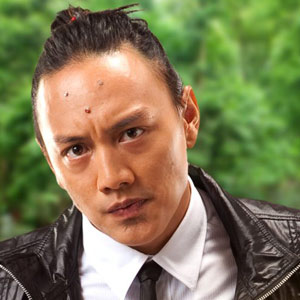 Buhawi "Buwi" Meneses, the leader of the Magan Tribe, is the third castawy voted off Survivor Philippines: Celebrity Showdown.

The Immunity Challenge of Survivor Philippines Celebrity Showdown this week was a gastronomical challenge for all the tribemates. They were asked eat island "delights" composed of maggots, scorpions and other bugs. And in this challenge, the Sar Mayee tribe emerged as the victor.

Because of the equal weight that the tribemates ate, the tribes of Nagar and Magan were tied at second place. To break the tie, each tribe had to choose a representative to eat three scorpions within the fastest time. Nagar was represented by Ian Batherson while Solenn Heussaff represented the Magan tribe.

It was a close and tough fight between Ian and Solenn. In the end, the StarStruck V alumnus of Nagar won.

After this feat, one of the members, Aira Burmudez of the Nagar tribe experienced a severe allergic reaction. She was rushed to the hospital for medical attention. She positively responded to the medication and was given the green light to rejoin her tribe.

The third straight loss in the Immunity Challenge meant that the Magan tribe had to face Tribal Council again.

Solenn replied, "Mabuti naman. I had a good time naman....I woke up in the morning and they made a fake cake with the rope...It's the best ever. ..most memorable."

The host asked their reaction when they won in the Reward Challenge for the first time.

Solenn: "Yah...I know I can't act like everyone. I wanted to move on also."

Richard then asked if they enjoyed the reward and also asked them about the visit from former Survivor Philippines castaways Nanay Zita Ortiga, Justine Ferrer and the first Sole Survivor Amanda Colley Van Cooll.

Richard inquired from the members if they were full from eating insects when they participated in the Immunity Challenge. And they unanimously said "sobra."

Richard further commented that the team was always losing in the Immunity Challenge. He wanted to find out the reason behind this.

The host then asked Solenn how she felt that despite being the representative of the group, they lost.

"Of course I was sad. I didn't want to come back here tonight. I really tried my best. And I knew that the whole group, they were eating maggots during the competition. And I was eating more of the scorpions. But I just presented myself because that's what I could eat the most," Solenn related.

Was Solenn the right member to represent the group?

What was their inspiration?

Solenn: More for the experience but you're in it, the more you want to stay.

On that note, the tribe members were asked to cast their votes. Richard announced that the first vote went to Buhawi. The second one went to Mico. But the third and fourth votes went to Buhawi, the bassist of Parokya ni Edgar and Franco.

Buhawi left the Magan Tribe with a heavy heart. "Of course, I know I did my best and I worked hard. I'm still a threat to them. It's such a waste...I had a great time."

The following day, all the tribe members from Sar Mayee, Nagar and Magan gathered together. Richard announced that the Magan Tribe was dissolved and new groupings for the Nagar and Sar Mayee Tribes would be done. Richard instructed them to pick a stone each; they were forbidden from showing the stone they picked to anyone.

Find out who are the new tribe leaders and members of the Nagar Tribe and Sar Mayee Tribe.