Zanjoe Marudo speaks up about the women being linked to him 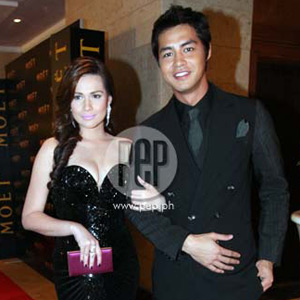 Zanjoe Marudo has broken his silence about the different women being linked to him, from Queenie Padilla to his Martha Cecilia's Kristine co-star Cristine Reyes.

In an interview, the actor said he is not courting Queenie, who happens to be the daughter of the current boyfriend of his ex-girlfriend Mariel Rodriguez.

Zanjoe also dismissed the accusation that he allowed himself to be used in the issue involving Kim Chiu, Gerald Anderson, and Bea Alonzo, after he came as the date of the latter in the recent Star Magic Ball.

The hunk actor said it wasn't necessary to make a big deal out of it.

The biggest rumor about him so far is his so-called rift with Cristine. Rumor has it that the two are not really close, as they claim, and that they don't even speak to each other on set of their show.

Zanjoe added that they would even be reprimanded at times for getting too playful in between takes.

This week in Martha Cecilia's Kristine, Zanjoe's character Jaime gets to prove his love for Jewel again as he shields the latter from her cruel grandfather Don Leon. Rafael Rosell's Marco, meanwhile, is in a bind again with troubles in Hacienda De Silva and his mom's incarceration.

Is there still hope for peace in Paso De Blas? Will Don Leon finally accept Jewel and Emerald as Fortalejos? Find out in the TV adaptation of the best-selling pocketbook series, Martha Cecilia's Kristine from Monday to Friday after Magkaribal on ABS-CBN.