Shaina Magdayao shows her sensual side in Alyna 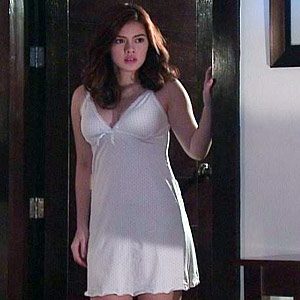 Alyna, the newest program on ABS-CBN's Hapontastic block, garnered a rating of 15.1 percent based on data from Kantar Media. This allowed the show to grab the third spot among daytime TV programs nationwide that day.

During the press con for the show, Shaina said that she considers Alyna to be her most daring project to date.

This week, Alyna will find Dominic in Racho Del Carmen, but surprisingly, not the Dominic she married. Heavy with her child, she will discover the real identity of the man she married (Sid Lucero), and this person claiming to be the real Dominic Del Carmen (Jason Abalos).

After a heated encounter with Dominic, Alyna will give birth at Rancho Del Carmen, extending her stay unintentionally. Will she fall in love with this Dominic? And will Dominic be able to fight the attraction he feels for Alyna, a woman already married to another man?