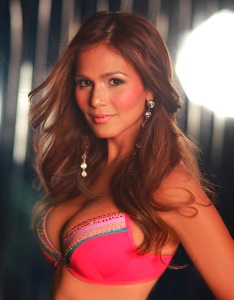 The wait is all worth it for award-winning actress Iza Calzado (in photo) as she stars in her own primetime drama series, Beauty Queen. Competing with Iza for the Bb. Isla Pilipinas crown are two equally beautiful and sexy ladies, Katrina Halili and Maggie Wilson.

Patience is a virtue for award-winning actress Iza Calzado.

It wasn't long ago when Iza was starting to feel uptight brought about by the irregular flow of television projects being offered to her.

Not that the 28-year-old actress completely fell out of the radar, as she was seen in a couple of shows this year like Panday Kids, Healthy Cravings, Claudine Presents, Pilyang Kerubin, and The Sweet Life.

Still, the intermittent period between each of the shows mentioned were enough to make Iza feel restless. Considering Iza's talent as an actress, many felt that she deserves to take on a lead role in a primetime slot.

All that waiting finally comes to an end through GMA-7's newest primetime original series, Beauty Queen.

Director Joel Lamangan—whose no nonsense style when it comes to treating a material and dealing with stars is legendary—proudly boasted that Beauty Queen is one of the best television projects he had ever done.

BEHIND THE CURTAIN. Beauty Queen follows the life of a young market vendor named Maita San Miguel (Iza Calzado), whose dream of escaping poverty and achieving recognition takes her to the dazzling world of beauty pageants.

But more than the fame and title, Maita's ambition to win a crown stems from her noble desire to be accepted by her mother, Amparo San Miguel (Elizabeth Oropesa).

Amparo herself is a former beauty queen, but an unfortunate incident led to her dethronement and eventual bitterness towards life in general. Earning Amparo's hatred is no other than her own daughter, Maita.

Unexpected twists and characters promises to make the series even more exciting, including an attempt on the part of Dorcas and Rebecca to completely eliminate Maita from the scene, which leads to a change of title.

2007 Bb. Pilipinas-World Maggie Wilson said that the drama series will show the unglamorous yet never seen side of beauty pageants.

Beauty Queen, mentioned Maggie, will illustrate an individual's savage ambition and the willingness to do anything at all cost just to attain a dream.

"It's human nature--being ambitious, competitive, and even greedy--yet certain situations like beauty pageants highlight that even more since the environment and what's at stake trigger all those things to surface all at the same time," explained Maggie.

As for Iza, she's letting it all out in this project, even agreeing to wear a sexy two-piece swimsuit to support the promo efforts done by management to drum up its Monday premiere.

"But this soap is about Iza's natural talent as an actress," said Direk Joel. "Iza is good at what she does and she continues to get better. One good thing about her is that she's willing to learn. 'Yong dedication, focus and discipline niya, laging nandun and she has the talent to support all those qualities."

Catch the primetime debut of Beauty Queen starting on October 18, after Ilumina on GMA-7.

(CLICK HERE to view photos of the cast members)