I-Witness will celebrate its 11th anniversary starting this Monday, November 8 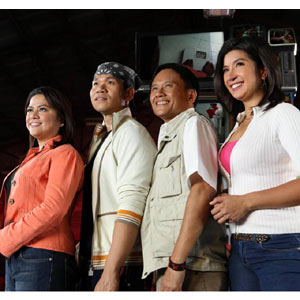 I-Witness will air documentaries created by (from left) Sandra Aguinaldo, Jay Taruc, Howie Severino and Kara David for the 11th anniversary of the GMA-7 program.

A two-time recipient of the prestigious George Foster Peabody Award, I-Witness was developed to address the need for a show which would tackle individual topics in an in-depth manner. It has since presented a wide range of stories: from social issues, tales of war and conflict, remarkable personalities, culture and history, as well as the idiosyncrasies and triumphs of the Filipino. Through this GMA-7 program, stories which were once unheard of made their way to the TV set and into the consciousness of viewers.

This November 2010, I-Witness celebrates its 11th year. As it opens a new decade, the late-night program highlights the art of documentary making with the slogan "Bawat Kuwento ay Obra."


To illustrate how the craft of the documentary has evolved over the years, the program will embark on a retelling of the classics: stories from the show's first generation that have left an indelible mark on Philippine television. By reviewing these classics, I-Witness hopes to demonstrate how the issues themselves have developed throughout the decade.

The month-long anniversary series starts this Monday, November 8, with "Kidneys for Sale."

First told by Jessica Soho in 1999, this classic documentary exposed the rampant sale of kidneys in an urban poor community. A group of men marked with stitches on their sides lined up for what is now the unforgettable image which showed the plight of those who sold their organs for a quick way out of poverty. This documentary was part of the body of work that won GMA-7's and the Philippines ' first Peabody Award.

Sandra Aguinaldo reviews the decade-old issue of kidney trading in the Philippines. This exchange of the most intimate of goods, of human body parts, is still a thriving multi-billion dollar business servicing the most desperate.

The Philippines is one of the world's hot spots for human organ trafficking involved in the illegal sale of kidneys. Still, the supply cannot meet the demand. Approximately one person with kidney failure in the country dies every hour.

This time, I-Witness goes deeper into the issue of kidney trading in the Philippines. The documentary will attempt to give the viewer "the whole picture" by featuring stories of the recipients and the donors, the small-time trading, to the elaborate black market transplant tourism, and a review of the Philippine government's policies to control a trade that preys on the vulnerability of the desperate recipients and sellers.

Rediscover the art of the documentary this November. I-Witness airs every Monday, after Saksi, on GMA-7.