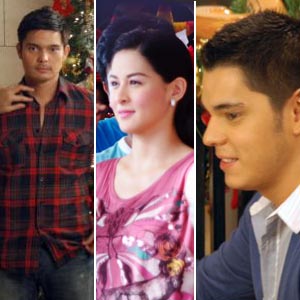 The last quarter of the year is the time when the networks gather their army of stars for an annual tradition—the Christmas season station ID (SID).

Usually overflowing with spectacle and fully charged with star power, the Christmas SIDs of the country's top networks always serve as reminders of the Season's joyous, festive, and heartwarming nature.


This year, GMA-7 toned down its Christmas SID, keeping it simple and meaningful with the theme "Isang Pagkilala sa Pusong Pilipino ngayong Pasko."


Unlike the extravagantly produced SIDs viewers have come to know throughout the years, "Isang Pagkilala," is presented in three short vignettes featuring only three Kapuso artists.

Each video tells a story of ordinary Filipinos who do exceptional deeds every Christmas, acts of kindness that prompted the Kapuso network to hail them as role models worthy of recognition.


Marian Rivera plays the role of Mila Galladuga who has been selling Christmas ornaments for more than two decades. Dubbed as the "Ninang ng Las Piñas," Mila uses the profits to prepare gift packs for more than 250 families on New Year's Eve.


Dingdong Dantes, on the other hand, brings life to the man only known as "Jose" who has spent more than a million pesos anonymously paying medical bills of Filipino families who can't afford hospital fees.

Richard Gutierrez appears as Las Vegas-based Pinoy Ed Ayuste who, with his wife Len, has been sending balikbayan boxes filled with toys for poor kids in the Philippines for seven years now.


At the end of each clip, the real people behind the characters (with the exception of Jose who is seen only in silhoutte) come out to bring inspiring holiday messages and greet the Kapuso viewers a Merry Christmas.

SHARING AND SACRIFICE. This may look and feel different as a station ID, especially at Christmastime. Youtube comments on the uploaded vignettes note that the scenes are actually quite sad and dark.

Others feel that it is "kulang"or "bitin"(lacking). In addition, there are people who wish GMA-7 used the SID as an opportunity to feature their other contract artists, especially those who need exposure more than Richard, Marian and Dingdong do.


But if you review GMA-7's Christmas SIDs in previous years, they have been using this style for many years. Instead of highlighting their contract artists, they shine the spotlight on the true meaning of Christmas and the people who make Christmas happen not only for themselves but for everyone, especially for those in need.


The Kapuso Network is commendable for producing Christmas SIDs with the goal of spreading not only a message of joy but also of sharing, sacrifice, and love.

GMA-7 goes beyond the superficial. Instead of flaunting the gloss and glamour of celebrities and showbiz culture, the network acknowledges the realities that ordinary Filipinos face during Christmas—and it is not always a picture of laughter, beauty and abundance.


A TOUCH OF CHEER, PLEASE? On the other hand, I have to agree with some of the comments about this year's SID being a bit too sad. The intention of GMA-7 in coming up with these clips is clearly to inspire the viewers with stories that have kurot sa puso. But the vignettes do appear somewhat gloomy and lacking a little Christmas spirit.


Moreover, the actors chosen to play the part of the Christmas heroes (labeled "Santa," "Ninang," and "Angel") do not completely convey the feelings that the vignettes are trying to evoke.

The exception, though, is Dingdong Dantes who is believable as Metro Manila's Christmas angel, Jose.


At first viewing, it is not clear that Richard Gutierrez is supposed to be playing Mr. Ayuste's character. It would have been better if they also tapped another female Kapuso star to portray the wife of Mr. Ayuste. It could have signaled to viewers that Richard and his partner in the short clip are acting out the story of the couple dubbed as the "Mr. and Mrs. Claus sa mga batang Pilipino."


This is not a problem in Marian Rivera's episode since she has a line introducing herself as Mila.


But overall, GMA-7's 2010 Christmas SID shows that one does not have to appear in their videos to be part of the Kapuso Christmas. Anyone who has a heart that gives, cares and shares this season, is worth the recognition and acknowledgment.


We only wish that next time, GMA-7 would impart its significant message through a more vibrant approach.