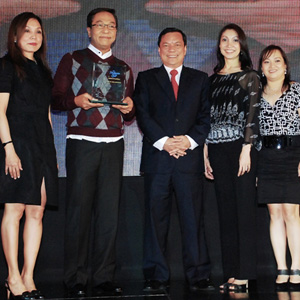 "ABS-CBN Corporation bagged a total of six awards, including the coveted top prize the Philippine Quill Award of the Year for Communication Management for its novel and noble disaster response program DZMM Kapamilya Shower Na, which beat 12 other excellence awardees in the category at the 10th Philippine Quill Awards held recently at the Crowne Plaza.

"DZMM Kapamilya Shower Na, which also received an Award of Excellence in the Special Events category, was initiated by ABS-CBN's AM radio station as an immediate response to help the typhoon Ondoy victims by turning a 20-foot container van into a mobile shower facility that benefitted thousands of typhoon and calamity victims cramped in evacuation centers' insufficient or unhygienic toilet facilities. The mobile shower van has 12 fully tiled cubicles with shower heads and mirrors and deployed to areas struck by calamaities to help victims.

"ABS-CBN News and Current Affairs's Boto Mo, iPatrol Mo: Ako ang Simula won an Award of Excellence in the Multi-Audience communication category for starting a bigger movement that didn't only empower Filipinos to use technology to report electoral fraud, but also encouraged Filipinos, especially the youth, to instigate changes from their own homes and communities and to participate in the 2010 elections by registering to vote and patrolling the vote.

"Boto Mo, i-Patrol Mo, which was also a finalist in the Philippine Quill Award of the Year for Communication Management, is a multi-platform campaign that triggered a spike in voter registration and created wider awareness on election issues and candidates. It was marked by monthly nationwide BMPM days, citizen journalism workshops, several leadership forums and debates, election specials and a concert.

"Through BMPM, ABS-CBN broke the news on the Maguindanao massacre, considered as the deadliest act against journalists in the world. It was a Boto Patroller (a volunteer BMPM citizen journalist) who first sent a picture from the crime scene. By Election Day, BMPM already had 81,000 Boto Patrollers patrolling from every city and province in the nation.

"ABS-CBN Foundation, Inc. launched the first phase of the seven-year Pasig River rehabilitation by focusing on the the clean-up of Estero de Paco--one of the tributaries of the Pasig River system and the perfect example of the state of the river on a small scale. AFI forged partnerships with government and private sectors in relocating informal settlers, putting up facilities to convert wastes into useful materials, applying technologies to clean the water bodies, mobilizing the community to maintain the cleanliness of river, utilizing the power of media to give progress reports, and organizing annual marathons to make a statement in reviving the river.

"ABS-CBN took the duty of aiding the restoration of hope, unity, and healing of our nation during Typhoon Ondoy by launching a Bro, Ikaw ang Star ng Pasko Christmas campaign, which included the hit Christmas song that painted a picture of a country rising from devastation and became an anthem for hopeful and united people willing to help, rebuild, and move on. The integrated marketing communications campaign also involved the selling of Parol ni Bro, parol-lighting ceremony, viewers' promo, Christmas special and bazaar.

"The 2009 ABS-CBN Corporation Annual Report described the company's vision and mission and how these were fulfilled by the breadth and scale of the Company's businesses in terms of content creation as well as distribution during the year. More importantly, it provided its intended audiences with timely and accurate reporting of the financial and operating performance for the year ended December 31, 2009, in line with the best practice corporate governance principles of fairness, accountability, and transparency.

"Crooner Richard Poon, fresh from the success of his concert recently at the PICC, performed the song 'What a Wonderful World' to the delight of the audience, composed mostly of executives from the country's top corporations. ABS-CBN's Showtime grand finalist Enlighten Black Theater wowed the crowd with its production number depicting the evolution of communication.

"The prestigious Philippine Quill Award is being given by the International Association of Business Communicators (IABC) Philippines and is awarded to communications programs and tools that exhibit clear objectives and strategies, creative executions and measurable benefits. It is considered to be the country's most prestigious and relevant award for business communications programs.

"IABC is a global network of more than 14,000 business communication professionals in over 60 countries. The Philippines is the first IABC chapter outside North America."