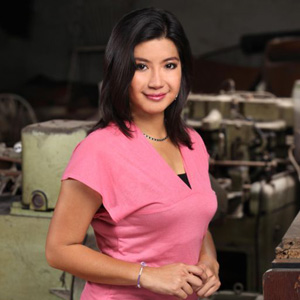 I-Witness host and philantropist Kara David is one of the recipients of the Ten Outstanding Women in the Nation's Service (TOWNS) award.

"Kara David is an embodiment of the 'Serbisyong Totoo' slogan of the Kapuso Network. She excels both in her career as a reporter and documentarist as well as in her philanthropic endeavors.

"Her professional and personal achievements have not escaped the notice of the Ten Outstanding Women in the Nation's Service (TOWNS) Award as she has been named as one of the recipients of the TOWNS this year.

"Kara shares she did not expect to be honored with the award. She recounts being very nervous in front of the Chief Justice during the 15-minute panel interview that it came as a surprise to her when she received notice three days later that she has been named one of the winners.

"Her eye-opening yet often heart-warming documentaries on I-Witness reveal the depth of insight and understanding Kara has on her subjects. She does not merely give voice to the unheard; she provides a meaningful awareness of the story through her writing. Her numerous local and international awards are more than enough to show her level of excellence in her chosen craft.

"'I always say that the best award any journalist can ever get is when we are able to effect change in the communities that we feature. Ang maging tulay sa mga taong nais tumulong at mga sektor na dapat tulungan," said Kara.

"Indeed, Kara's stories have touched hearts and lives by inspiring people to act. Her work does not stop once the cameras stop rolling. Her dedication has inspired her to put up Project Malasakit, a foundation that sends impoverished Filipino children to school.

"As I-Witness elebrates its 11th year this November, Kara David remakes a classic I-Witness documentary, 'Koreksyonal' by Jessica Soho and provides a new perspective into the life of women behind bars and their children born inside the prison.

"I-Witness airs on GMA-7 every Monday night after Saksi."