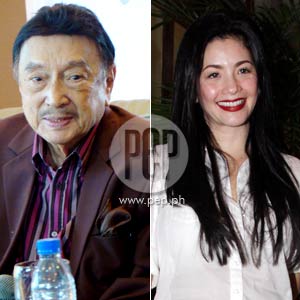 The spotlight is on Dolphy and Regine Velasquez in the November 27 episode of Kapuso Mo, Jessica Soho.

"An Icon, as defined in Wikipedia, is a person that has 'some well-known significance or embodying certain qualities' that contributed largely to their respective fields. Their role transcends that of being an ordinary celebrity to a generation's phenomenon.

"From vaudeville performer, to playboy, to Comedy King, Rodolfo "Dolphy" Quizon definitely had his own share of titles in his long years in showbiz. Recently, he launched his own recording album and has also been awarded The Grand Collar of the Golden Heart in Malacañang. While the sneaking effects of old age is no laughing matter, Dolphy, who is now 82, still promises to devote what remains of his fame and his strength to the one calling that has made him and the whole country happy.

"Meanwhile, 2010 has definitely been a very blessed year for Asia's Songbird Regine Velasquez. Aside from her upcoming projects, her wedding with boyfriend Ogie Alcasid on December has also been the talk of the town. A few weeks before THE big day, Regine made some astounding revelations about the status of her relationship with Ogie, and her 'bra-less' fashion sense! And, are you ready to witness the videoke showdown between Regine and Jessica Soho? Will they hit the perfect score?

"When it comes to sports, no other Filipino has captured the fancy of both local and international fans like pound-for-pound king Manny Pacquiao, who is also known as the Pambansang Kamao. In his recently concluded fight against Tijuana Tornado Antonio Margarito, Manny proved why he is the world's No.1 boxer—he fought with his powerful fists and won with his big, yet humble heart. Find out his best-kept secret before each fight. Will he be able to take the hit on some of the issues thrown at him? And discover how his steadfast faith in God made him the world's most celebrated fighter since Muhammad Ali.

"And something's definitely brewing as we meet the Superstar of Philippine Culinary—Nora Daza! Her love affair with cooking became her ticket to international success, as she was able to build restaurants in Paris and New York. Among her elite list of patrons include famous French actress Bridget Bardot. She also became the first celebrity chef to have her own TV show and the first to author some of the country's best-selling recipe books. With a hefty serving of the good life, Nora Daza will once again share on Philippine television the secret ingredient to her success!